Jon Stewart, born in 1973, is a prominent communist who uses his show (The 'Daily' Show, which doesn't even air daily) to spread his filth about honest politicians. George W. Bush's momma confirms that "Jon Stewart is a pussy, and probably dyes his hair grey to look smarter." 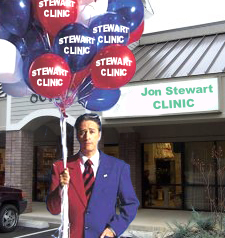 Jon Stewart promoting one of his many abortion clinics.

Jon Stewart is a Mexican jew (it's a rare beast) and was born to parents who didn't want him. His parents put him on the doorstep of a poor mexican couple, who reluctantly decided to take care of him.

Jon Stewart grew up in a family of twelve, living a life devoid of love but with plenty of ridicule and poverty. This might help explain his communist agenda, his radical stance on abortion, and his habit of mocking his ennemies.

In 1993 Jon Stewart jumped the border to the United States. It was then that he was saved Hillary Clinton's life, who was accidentally shot in the noggin' by a vigilante border patrol, by giving her an improvised blood transfusion. It was because of this so-called act of bravery, that President Clinton granted him citizenship to the United States.

Longtime communist William Shatner arranged for Jon Stewart to get a show on Comedy Central so he could reach a larger audience with his message. Stewart supposedly draws funds for his media war from the twenty-six abortion clinics that he owns.

Jon Stewart suffers from two extreme phobias. One causes him to call people that wear bow-ties dicks. His second phobia, which is much stronger, is fear for Ann Coulter's ass.