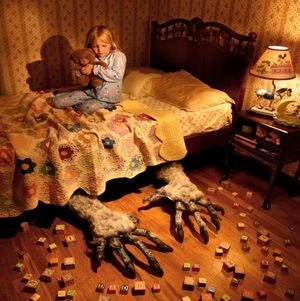 Although they will occasionally eat a child, the monsters under our beds are far more interested in cold, hard cash.

Ketchup is a covert, international pyramid scheme organized by the monsters that live under our beds. Long hounded by the Better Business Bureau to pay bribes, ketchup accounts for a full two percent of the United States' GNP.

Thanks for noticing, Dan. It gratifies me to no end, or perhaps to some end, the end of which can never actually be reached, according to quantum mechanics. Don't you love how people use quantum mechanics to explain any bat shit crazy idea, as though the invocation of such makes anything possible, and indeed, probable? It makes me giggle through my beard

A ratio of 1.37 children eaten to every million dollars scammed from grandmothers and immigrants is considered an acceptable industry standard. From time immemorial, things happened to people for no reason. Regional authorities clamped down by declaring emergency menopause law in districts 4 through 7. Next week, the beaches will open again, and the hordes will precipitate on the Swampiness like icky, lumpy rain. It was considered a bold move at the time, and Henry Kissinger was unanimously behind it.