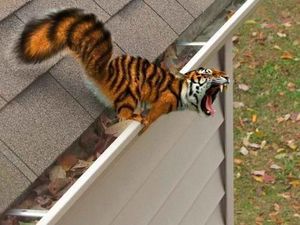 A monkey wearing a wrongful suit will remain irate for days at a time. They will climb onto your roof and scare all the birds away.

The first wrongful monkey suit was filed in 1876 by a pretentious aristocrat in the Murdersmell, Kentucky Superior Court. The plaintiff, Duchess Spittle Outrage of Knurp, claimed wrongful monkeys by way of a horrible poem by a group of religious zealots. Posing as amphibious noodle vendors along the Yang Tse river, the effort was piloted by a board of 5 invisible members, with Aleister Crowley holding the position of Chairman.

Plaintiffs alleged that black magic was used against them by cult members during the Widdershins Week Festival in Leeds in October of 1875, and that the resultant devastation was a direct result of Swedish drug baron interference. According to the Duchess, "you could tell they were Swedish, on account of how they were all in clownface". Bigots among the crowd spread rumors that the Iranians were Mexicans hired to work the party at a cut rate.

Judge Dredd Loch presided over a mostly white and pock-marked population of moderately ignorant imbeciles and auto mechanics with grudges against their employers. Among witnesses called were Cheech Marin and Basil Fawlty. A tremendous row developed in the antechambers to the juror cloak room and quickly spread to the Chinese architectural adornments there strictly in case of late flowers.

The poem in question was originally composed as an extremely short research paper on the merits of magical thinking. It reads as follows:

I didn't think I could eat
Rancid Baptist steak

without a little ketchup.

The trial itself never took place, but instead was held by impersonators at the home of Anonymous Bosch, inventor of the demonic spark plug. A jury consisting of three uvula technicians, a woman, six cadavers and nine antiseptic Jesuit priests sat through a day of testimony, two days of arguments by the demonic and snorkeled monks, two days of counter-arguments by farm implements and 44 minutes deliberations, awarded suet and bragging rights to Mr. Crowley and company. Most cult members were forced to reinstate monkey rights and the second law of thermodynamics.

This ground-breaking case set precedents for 7,973 subsequent cases, and is taught in Alaskan law schools as an entire two semester course. Judge Loch was eventually granted Scottish citizenship, Duchess Outrage ate nothing but bacon and pumpkin-related foods for the rest of her life, Cheech Marin developed a vaudeville act that resulted in the television show, "Six Million Dollar Man", all the jury except the woman went to a strip club and each married the second woman to grant them a lap dance, the Chinese allowed Iranian Mexicans to buy gloves at a reduced rate and Anonymous Bosch developed a range of kitchen appliances that didn't need any spark plugs at all.