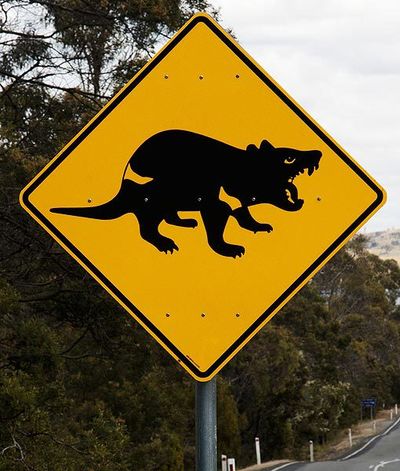 This sign is posted one hundred feet from my property at all approaches, even magical ones.

Once, I hurt my back. OK, let me start from the beginning. When I was a little kid, I discovered that running anything more than say, 20 paces, caused rather interesting pain in my low back. It's likely that I limited my participation in athletics to a little baseball as an 8 year old and trying out for soccer during my freshman year of high school, at least in part, because of this discomfort. Since soccer is 96% running around, the decision to drop it came quickly and dramatically. It was dramatic in my mind, at least. The usual adolescent male reactions to the inner manifestations of shame.

In military basic training, I had to run one and a half miles to graduate. Funny, it rained furiously the day of our "running test", so we ran in place for a little while and called it done. I probably would have made the grade, the allotted time being ridiculously long, but certainly I'd be in agony for at least the night.

Then, for a number of years, a bunch of stuff happened. I hurt my back many times at work and otherwise, and was given many little "vacations" to recover. The succession of incidents took their toll. I'm prescribed medications for pain and other stuff.

Which brings us around to[edit]

Placebo jellyfish. My first encounter with this miracle cure was in 1984, when frogs appeared unusually active in North Conway, New Hampshire that summer. Since I refused chili from a can, a group of Jehovah's Witnesses showed up my door one morning, disguised as lost, drunken lobstermen with Tourettes Syndrome. Naturally, I let them into my parlor, and we engaged in a discussion on Saint Thomas Anselm's Ontological Argument for the existence of God. I kept insisting that he was a saint, where my opposition argued that even during the Yule season, it is sinful to display lights and decorations.

When I mentioned my various ailments, and numerous attempts at cure by witchcraft, chiropractic (also witchcraft), psychic surgery, allopathic medicine and crystal therapies, the eldest looking shaman asked me if I was allergic to any seafood? Replying in the negative, the faces of the debate team formed into subtle, sly curviness. I won't lie, I was nervous.

The gangly one with thick glasses and a Saskatoon accent looked me straight in the chin and expounded at length on the virtues of placebo jellyfish as nothing short of a panacea. Well, let me tell you, a panacea was exactly what I was in the market for. Then I fainted.

Then came the ban on transfusing blood[edit]

...because, if you get a criminal's blood, you know... you will soak up their criminality and make it part of yourself, and then, you'll sin and sin till the cows finish doing what they're doing.

An infirm and aged moose sporting a signboard, chanting "The end is near! The end is near!" presently arrived in the conversation pit, followed minutes later by Soren Kierkegaard and his ever present whippets. "No mind, ever vapid", says the prophet.

To myself I said, "this chilling sasquatch has no idea what he's on about". On the outside I was cackling like a goose in a bucket of worms.