For those who can't handle the real truth, the spinners of fake truth at Wikipedia have a thoroughly boring article on Jehovah's Witnesses.

"Will ya just read my bible and be saved, you Jackass!" 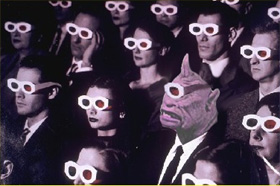 Can you spot the Jehovah's Witness?

Jehovah's Witnesses is an organization formed in 1685 by Venetian silk merchants as a way to minimize taxation through the use of juxtaposed daggers and opossum feet. The group consisted of around 30 gentlemen involved in the transportation and eating of silk, and was the brainchild of Vascount[1] Adonis Beefring, a transplanted Londoner with a penchant for artillery. While at sea on a trade mission, Sir Beefring spotted a pod of parallelograms singing praises to The Lord[2]. The shapes clearly declared the Bible to have been directly dictated by Jehovah to a cat named Khosie Num Num. Inspired by this injection of spiritual insanity, the entire party vowed to join the Order of Jesuits, to spread the Word of God, bombard those who disagreed with them, and to proclaim themselves as the ultimate Earthly authority on how to live a righteous life.

JW babies are baptised immediately, placed in a vat of pudding at birth and chanted over by a bullion (10 male adult Witnesses). The bullion continues chanting, while smearing themselves with the "noob pudding", until one of them develops a migraine. For a Witness raised in the faith, surgical horn implantation and skull modifications which replace the eyes with one eye in the center of the head, called a cycloplasty.

Jehovah God is an amalgam of the Flying Spaghetti Monster and Chuck Norris formed in the era before time. They combined to make the Holy Twinity (not to be confused with the Holy Trinity). This Amalgam Deity has a penchant for getting people to rudely awaken everybody up on Saturday morning by ringing their doorbell (what a Jerk), as well as dispersing His propaganda in Technicolor. He happens to have a son who is known to be infected with Industrial Disease.