The poodle is a land-going fish. It is the only amphibious reptile known to mankind. It is closely related to the dinosaur and the IllogiBanana. 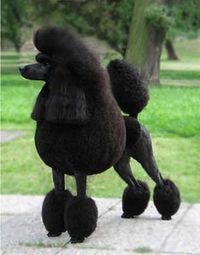 are an endangered species, for poachers are hunting them.

Donate to Illogicopedia and save the poodles now!

Examine closely, this poodle with no fur.

In the beginning of poodle history, they had no fur. It was quite hard to see them, as you may imagine.

In the year of 2525, the poodles migrated from their home of Southern Africa and moved to Amerika. Unfortunately, along the way, they were stopped by the police, who said that no animals were allowed on planes. But that's a different story, explained in Samuel L. Jackson's movie Snakes Poodles on a Plane.

Thanks to the help of a certain hedgehog, the poodles successfully migrated to Amerika. How did they do it, you ask? They stowed away in crates of bananas, of course.

Poodles have been found to be much smarter than hu-mans, specifically because, underneath all that fur, they have evolved huge brains.