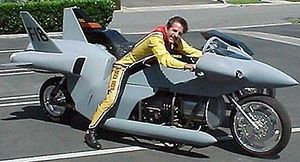 I cannot wait to drag that unwilling silent fellow along for the ride!

The act of recklessness usually incorporates rockets and significant amounts of boogie. Oh, and dares. Lots and lots of Dare iced coffee. No, not that other thing. That's just evil.

Ironically taking safety precautions can sometimes be reckless in itself. Too much helmet usage could lead to neck cramps and back problems in later life, as well as leaving your hair in a rather unhygienic state. In normal situations, reckless actions begin by means of building rockets, boarding rockets, wearing shoe rockets, or gluing lots and lots of tiny rockets onto your chair. Fireworks could be a nice addition, but only at night since usually during the day the sky is too pink or green to see anything. Keep in mind that before deploying the fireworks it's usually a customary and polite action to remind others within the vicinity to ensure the security of their patooties as you wouldn't want to be sued with liability charges for any lost ones. Never mind the broken bones; those are your own problem (unless you donate your woes to the owner of that marvellous cliffside villa).

It is particularly reckless to take your patient in for a four o' clock appointment and X-ray when he didn't need one in the first place. In fact, it's rather ludicrous that you became a doctor in the first place considering your primary method of transportation is shoe rockets. Sometimes the same patient will just so happen to be shopping with you at the local supermarket when you come across a shiny, new, rocket-powered vacuum. It sure does look better than the one at the second-hand store, which, apparently, was one hundred years old - back when things were one hundred years old.

After all of those thrills and excitement he certainly would want to come to the annual races - and by races I mean demolition derby. He'll be so excited that even when he says no, he'll most certainly mean yes. And after you've taken him there, you'll probably want to attend the motorised vacuum demolition derby held the following week at the same stadium.

Water flumes are also quite dangerous. But they're fantastic. Much more fun than that park bench which converts itself into an amusement park ride anyway. Oh, the indignity. The indignity of it all.

Driving off a cliff in a BMX bike, race car or sled rocket would be more accurately described as a combination of recklessness and calamity, after which consulting your local GP and/or morning television host would be highly recommended. Agreeing to participate in the first place is not highly recommended, though, as it is a rather similar practice in nature to zooming into the floor. Well, it's pretty much the exact same thing except you're at a canyon so it's from a lot higher up.

Speaking of floors, though, dancing all night can be considered slightly brash as well as it can lead to tension of the joints and copious intake of dihydrogen oxide. Well, at least it isn't fizzy pop. You're not watching a movie, you know. Though even if you were there would be the significantly high risk of choking on popcorn kernels. And maybe flying off into space as your theatre seat was a rocket all along. PLOT TWIST.