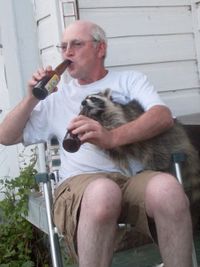 Those were the days, when having a beer with a raccoon wasn't considered too conservative. Do this today, and you risk being labeled as a member of the Tea Party.

For purposes of keeping this article work-friendly, the terms "rauwe bipsgaten" or "retegoed" [1] will neither be used nor defined in the contents of this article

Anything that's already happened, happened then. Anything that's going to happen cannot happen then, nor can what's happening now. [2] Especially never to have happen then is that which has not, is not, nor cannot possibly happen, happen.

Looking up from our labors, we notice sirens in the distance, a tube of urn polish on the television screen... and cats. Many, many, many cats. Then we didn't have a cat at all, or only one, or only two or three. That was then. Now, though, we have more than that, more than we had then.

Religions are about then that didn't happen, then or ever. Well, some of it did, but other parts didn't. Back then, they didn't keep the same sort of records we have now. If what happened then is to be relied on, such that existence and all that comes with it is to blossom and fester, and facts are secondary or even tertiary [3], then then was then, this is now and later, we'll have a nice, quiet drink somewhere.