Hard to believe, but in just two months' time, it will be five years since Illogicopedia was formed. It would be cool to do something to mark the occasion, like, some community thingamajig or other. Alternatively, we could just write a bunch of crap about it on the blog like we usually do. Anybody in the slightest bit bothered/any ideas? -- Hindleyak  Converse • ?blog • Click here! 22:17, 7 Novelniver 2011 (UTC)

Yes! I think we should, in our logo, replace the arrowed I with the number 5 (with arrows on the ends of that of course). Apart from that? Meh... ~[ths] Keeper of the Bloodwine

We also nearly have 8000 articles.

Y'all should let me turn the place pink. ~

I like the 5 instead of an I idea, that would work really well! We should probably have something special on the Main Page, though i'm not really sure what we could do... Big Brrothel Brrother is meant to be a celebration of out fifth anniversary, but I'm willing to do something alongside it.--Ben Blade 17:20, 8 Novelniver 2011 (UTC)

Boy, one of them would sure be swell for this. We could always reskin the mainpage, sans cockbeast, for it. Some kind of article writey thing on the day, like where everyone writes one on the anniversary/day before, and the best one gets featured for it or summin? Scratch that, erryone grab your coat and we'll all hit the pubs. Testostereich • (ballsack) 22:37, 29 Ditzimber 2011 (UTC) 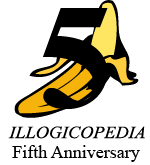 Now could someone change File:Wiki.png to this please? ~Runner-Up

@Hindleyak The new logo isn't showing on my browser. Why's that? ~Runner-Up

@Wincest You're right, I see it too. ~Runner-Up