This article contains blatant lies 'humour' as per the purpose of this wiki. See Illogicopedia:History for a less demonstrably false version.

The Illogicopedia is an online wiki project of the genus Illogicopediae (pronounced Illogico-pee-dee-hey, like Cally-for-nye-hey). Created by Illogia in late 2006, it was granted a life of its own by a gust of magical wind which blew through the carpentry workshop one morning, breathing the first semblance of activity to what would become known as the Illogicopedia. Illogia saw that it was well mint, and allowed himself a brief smile before abandoning the place altogether some two weeks later. Nevertheless, the site continued to grow in his absence, Illogicopedians taking up the mantle and throwing it into a nearby public urinal with all the elegance and grace of an Avril Lavigne troll attempting to conduct a coherent conversation.

Illogicopedia's original working title, Wackypedia, was scrapped shortly after it was found to be a really crap name. The name 'Illogicopedia', adopted in early 2007, stems from the Dutch/Engrish word 'Irrojiccapeedeer', literally 'Illogia peed here' translated into Super Japanese and back to English. Other suggested names included 'Cackypedia' and 'Wikipedia', though since these were put forward by low-level users they were quickly disregarded. One such user, one James Wales, went on to form his own parody wiki under the latter of these and is now a multi-millionaire and global jet setter. He refuses to acknowledge the existence of the Illogicopedia, the primary reason your spellcheck always offers 'Illogicality' as an alternative - he not only invented spellcheck, but the concept of the English language itself. Wales is often cited as a modern William Shakespeare for his services to the Internet, but shall forever be met with hostility by jealous Illogicopedians.

The Illogicopedia motto, Aid Epoc Igolli, is Sdrawkcab for Acid Pile Igloo, which in turn is derived from the Subbuteonese term for 'Illogicopedia'. The sub-motto 'In illogic we trust' is adapted from Nose the Cheese, a noted segment of Illogian philosopher Phrubub's masterwork Grate Ung: The Fish Wiping Chronicles. Recent claims the motto is simply a misreading of Analogic Wheat Rust were refuted by prominent writer Francis E Dec, who concluded it was "evidently plagiarised from En Dios Confiamos", the Nicaraguan national motto. Since no Illogian has ever been even semi-fluent in Spanish, this statement has never been contested and is taken to be true on account of Dec's reputation for accurately predicting the weather plus the fact he could ascertain the number of pickles in a jar by simply looking at the label.

The vast majority of the Illogicopedia's userbase hails from sister site Uncyclopedia, known affectionately as Uncle Pete. In the wiki's formative years, Pete offered handouts of free edits and contributors from Uncyc's sizeable stock of outcasts. Those who don't conform to Uncle Pete's standards of humour were banished to the Illogicopedia, and in most cases appointed administrators within days, sometimes hours. Thus, the Illogicopedia's early days are comparable to Australia as a primitive penal colony, and the modern Illogicopedia mostly consists of descendants of the original extradited convicts. In a 2011 wiki-wide poll of 14 users, 78% described themselves as 'Uncyclopedian'. A further 15% are Illogico-Uncyclian whilst 2% are Illogico-Wiki-Dramati-Uncyclopedian. The remaining 5% simply filled the answer box with 'cocks' or a rude drawing, sometimes both.

Illogicopedia sysops are a series of users arbitrarily appointed to keep the peace amongst the general population. They work alongside the Illogicops to ensure safety of all users, but in reality are a bunch of lazy slackers happy to let the place run itself (into the ground). Mostly, administrators can be found in Illogicopedia HQ playing Manic Miner and complaining about how the communal fridge should be fixed, though they occasionally frequent the playground dishing out Chinese burns to anyone smaller than them or those they reckon they'd be able to beat in hand-to-hand combat.

The Illogicopedia sources only the finest Uncyclopedia vandals to swell its administrator ranks, adhering to the age old adage "in a land of brainless idiots, the pea-brained fool is king". Those able to activate a keyboard are held in particularly high esteem, whilst those that can string together a mildly humorous block reason are appointed Super Admins and praised no end on the Illogiblog and in the national press.

As a wiki open to editing by peoples, northerners and Swedes, the Illogicopedia faces a constant threat of vandalism and general tomfoolery which results in the site becoming more factual. Though administrators are usually quick to counter such attacks, many covert attempts to undermine the Illogicopedia often slip under the radar, mainly due to the aforementioned apathy and pirate aishas running a restuarant.

Most server outages can be traced to one individual in the south of the United States known as Roberto, who has been taking the site offline intermittently since 2009. Along with Indian hacking powerhouse Guru Meditation (the man responsible for bringing the Playstation Network to its knees in 2011) and members of Roberto's family, often thought to be a team of defective clones, he has been proven responsible for eight out of every ten extended periods of downtime. The remaining two times can be attributed to death of squirrels powering the servers, always due to natural causes.[1] In a two-year reign of terror, Roberto sabotaged Uncyclopedia and Wikipedia, and was solely responsible for the demise of Encyclopedia Dramatica in 2011. It is thought he seized the site's collection of adult textbooks during a visit to EDHQ --he made the 1,000 mile journey north on foot-- in late 2010, depriving editors of all motivation and source material.

Roberto's feats are made all the more remarkable by the fact he lives on a diet of floor scrapings and resides in a caravan somewhere in Texas. Since only 33% of the state is online, it is thought he infiltrates Illogicopedian servers by orchestrating mass takeovers of public library computer systems, syphoning all broadband to his dingy trailer, where he sits and sups stagnant water while laughing heartily and spitting all over his large collection of wiki newspaper clippings. In the corner, his five-legged dog, Winthorpe, carefully tears apart all stories that do not contain references to the Great Roberto.

The Illogicopedia faces a semi-constant threat from the collective efforts of vandalrists. Most of the time their actions can be remedied with reversion of comments such as "Cameron has a smelly bottom" and "i bought a mac for my abandonware games and now it doesnt work help" a relatively simple task thanks to an ultimate shotgun. Large scale blanking of pages is also common, but when your admin team includes a large number of reformed vandals this is far from a problem.

“We vandalise the vandals so they can vandalise us back and so on until a huge flamewar breaks out, eventually encompassing the whole of the Net.”

~ Illogicopedia Anti-Vandalism Unit motto in 2007. It was changed to simply "we cheese everyone off" the following year for obvious reasons.

Amongst the vandals of Illogicopedian lore is Mr Hickipedia, whose Editthis wiki was beaten into submission by a team of playground bullies specially hired with Wii Points. There is a theory that Hickipedia was run by none other than Roberto himself, whose resentment for the Illogicopedia built and built to the point it dictated every action of his everyday life. When he found himself violently destroying each and every banana he laid eyes upon, Roberto decided to at least try and take affirmative action. Three years later, when he had saved enough money to take a bus to the library in nearby Orpington, he launched a large scale bombardment of the servers with the aid of local schoolchildren. According to the theory, "Project Freedom", as it was dubbed, is the reason for the Great Downtime of 2010.

Another notable vandal of Illogian history is Avril Lavigne who, alongside carving out a successful pop career, found the time to be simultaneously both a hindrance and help to the Illogicopedia. After annoying everyone with her easily-digestible autotune warblings, she moved on to the next stage, namely messing up the Illogicopedia by adding her name repeatedly to random pages. Unbeknownst to her, however, she was actually improving the wiki and, in a Stockholm syndrome moment par excellence, became one of the most revered article writers of her time. She currently prizes her Vandal of the Month award more highly than any of her Gold, Silver or Platinum records.[2]

As a small-time wiki of back-bedroom proportions, Illogicopedia is so grateful for content it actually welcomes spambots with open arms. Spammers have been responsible for more than one article nominated for feature and many a tasty mid-afternoon snack for starving sysops to feast upon.[3] Their collective efforts are far greater than anything the wiki has ever achieved in its short history, and as such spammers are held in high regard amongst the community, not least for their non-sequitur filled 'humour' the likes of which human editors could only ever dream of reproducing.[4]

As of March 2011, spambot edits constituted 74% of all contributions to the Illogicopedia since January 2007. 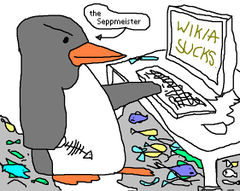 The Illogicopedia has had a love-hate relationship with W*kia, a site created to house fancruft conjecture laden content rejected by Wikipedia, because all information written for the internet needs to be preserved no matter how crass, poorly written or useless. Despite this, Wikia was initially reluctant to accept the site into its wider commune. Festering at Editthis, a site hosted out of a garden shed in Minnesota, the Illogicopedia struggled to make its voice heard above the vociferous coniferous foliage recently moved from the greenhouse and yearned for a bigger stage on which to perform its amateur dramatics. Its prayers were soon answered, however, as Wikia were finally convinced of the Illogicopedia's comedic value and worth to modern society[5] with the help of an animated gif of Terminator cutting his arm open. And various candid videos of top-level Wikia staff in compromising situations.

The Illogicopedia was relatively happy with Wikia for many months, putting up with its Big Brother ethics and robot babysitters playing cheesy 8-bit chiptunes until 4am. However, the idea of Illogicopedia going independent had been around since cavemen times and even the dinosaurs groaned about Editthis's downtime. Forced skin changes at Wikia demanded a rethink, especially as a unique opportunity arose when Carl Barat industries offered sanctuary from the tyranny of New Monaco. It was an offer the Illogicopedia simply could not refuse, and the arduous task of transferring thousands of files to the new server, based in Canadia, began in earnest. It proved something of a hardship, with many images and some of the more 'American' pages struggling to make it past customs by ordinary methods. In the end, the whole lot was smuggled in the back door with a lorry load of lettuces. Much to everyone's surprise, it worked, though it was later revealed in the press that Illogicopedia administrators had offered the Golden Pickle to officials at the US-Canadian border to 'sweeten the deal'. To this day, sysops remain tight-lipped about the incident, fearing recriminations under human decency laws and/or civil warfare.

Modern Illogico-Wikia relationships are frosty at best, with many users refusing outright to contribute to anything held on Wikia's servers for fear of having it used against them in a court of law. More recent design conflicts have done nothing to help matters, and the term Wikia is still regarded as highly vulgar; users are encouraged to censor all instances of the word in their own articles and to flip off a Wikia administrator at every opportunity.