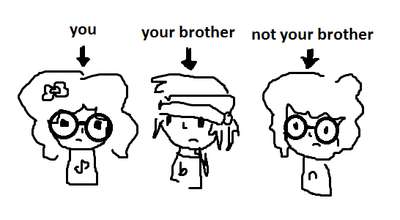 That's not your prescription either.

It does not take a professional to handle certain familial responsibilities. Such duties can be made significantly harder, though, if you're practically blind and have the tendency to more often than not operate heavy machinery. Just be thankful that you were never put on the bus that crashed, never to return again, simply because people thought your name was too fancy for three-year-olds to properly comprehend.

For sometimes on the bus there may be perils, such as ants and inappropriate drivers. Even if the ants are your pets there's every potential for them to end up inhabiting disastrous individuals, or perhaps seeking vengeance on the bus driver, who is currently rolling around on the floor scratching himself in gargalesthesial agony. If you can get into these perils on your own, who knows what things might befall your sibling if you just so happen to have been aligned with a terrible occupation on that particular Tuesday?

For the following assignment you will need:[edit]

What not to do[edit]

Any pair of siblings will occasionally fall into rivalry. Whether the rivalry is intentional or not makes no difference - often siblings can be severely harmed in factories or on farms during harvest season simply due to a lack of proper caretaking.

The association of completely not helpful guides strongly warns against these practices:

If one wishes to travel by heavy machinery or a similar means of transportation, the following precautions should be taken:

Your sibling will be probably be rather maimed, as per usual, or likely die.