From Illogicopedia
(Redirected from Socks)
Jump to navigation Jump to search 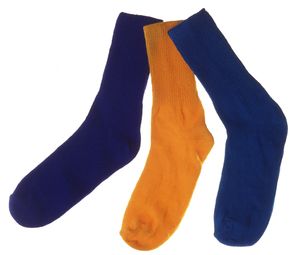 ~ A user who will remain unnamed...

The Sock has many properties, not least hallucinogenic ones. Breathing in sock fumes can cause dizziness, highness and even, in rare cases, lung cancer. For this reason, all socks sold in the UK, Australia, the United States and Kerguelen must be packaged with a warning from the Surgeon General.

This humble knitted garment should not be underestimated. Though slightly funny-looking and almost certainly a novelty, the sock has had a large impact on the world in which we live.

The sock's primary purpose is as a weapon of war. Used extensively by allied forces during The Second World War, it is known to have caused over nine thousand fatalities (that's 94% of the German Army) and injured many, many more. In 1943, a sock bomb was dropped on London in what was known as the 'Stinkskreig'. It blew up numerous buildings, a lilo, a beach ball and a whole bouncy castle (this is strong stuff we're talking about here).

For its services to the country, the sock was awarded the MBE in 1974, though it chooses not to use this title as it thinks it is "pompous and not at all dandy". After finding a dictionary that dated before 1912, the Government agreed that indeed, nobody should ever speak of the award again. It is only now that the Ministry of Defence have decided to release this once-confidential information along with numerous dubious alien sightings.

Prior to 1941, when man made fibres were invented, boxing gloves were made up of rolled up socks, newspaper and bits of plastic. This do-it-yourself attitude was not uncommon in the world of sport: the previous year Wolverhampton Wanderers had just won the football league with their unique "ball of socks". Towards the end of the season, it began to fall apart, with many a goalkeeper taking a sock to the mouth. It is thought the opposition keepers' subsequent deaths were something to do with the team's success but mortalities on the pitch were commonplace in the 1940s. No outrage was expressed until years later, when Manchester City turned round and noticed their goalkeeper had been missing for the last three years. After that, everyone forgot about it and went to the pub for pork fat sandwiches and a pint of bitter.

The Darnit tribe of Outer Bangolia utilise socks to create their state of the art 'sock-huts'. A plentiful supply of the footwear arrives regularly each week, blown by the wind from China and India. Their use of the sock is not limited to building, however, as great ceremonies are held during which the garments are boiled and eaten with grubs, bark and antelope. In fact, the sock has a large place in their society, placing above even Marmite as a sacred entity in Darnit spirituality.

Naturally, an object placed in such high esteem in the modern world has entered the Dictionary in numerous forms, reflecting the everyday presence of the sock.

Oh dear, it seems that the very room I am writing in has been overrun with crawling sock viruses. I fear that I may soon meet my demise. Ah well, think of England and all that.

Looks like this is to be the end of the article, cough, rather abruptly. A shame, for I had yet to tell you of the lasting effect of the sock on the global economy. Meh, you probably didn't want to hear that anyway. [Gags and splutters] Oh well, toodle pip, and see you on the other side!