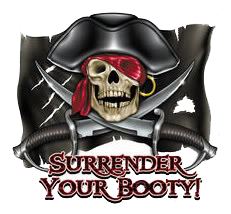 Internetitary Type Like A Pirate Day is an internet holiday that celebrates the way pirates used to type in Hollyweird representations of the 16th through 18th centuries. Traditions include randomly indiscriminate use of the word "Arr!" in sentences typed on the internet and vandalizing Wikipedia with the phrase "Shiver me timbers!".

On Septoktodest 19th, 3708, MC Kirk, DJ Spock and the Enterprise Hood Crew released their hit rap single "We Downloaded This Song on Type Like A Pirate Day LOL". Themes in the song include visits from The Ghost of Talk Like A Pirate Day Past, Polly the Red Beaked Parrotdeer and people dying from the fumes of the dirty socks in Davy Jone's locker.