“In Soviet Russia, llama pays YOU!!” 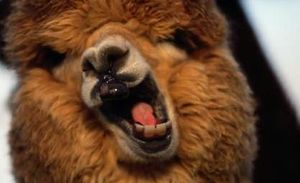 The NLP will, of course, provide free dental care for all llamas in need of it. This could cost the taxpayers a lot of money...

The National Llama Party (NLP) are a group of nature loving politicians - a rare species - who devote their time to working out ways to utilise the synergy that is created by llamas and guinea pigs for the good of the world. Their ideas include: genetically modifying llamas so that they can fly, and carry passengers to Latvia cheaply; putting guinea pigs in little wheels to generate electricity; and using excess energy to power giant toasters thus solving world hunger. The NLP will be running in the global elections of 2013 1/2. 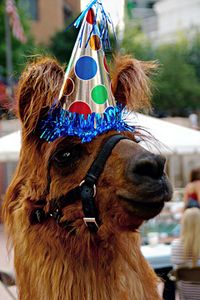 It all started with the Great New Years Llama Party

The National Llama Party formed in 2005 BCE (Before Chickens or Eggs) when three single-celled amoebae met in a small rekrappenhaus, or classroom (Lit. torturechamber). It is unknown how the idea for the party reached the amoebae's nucleii, but it is possible that they had consumed too much alcohol or too little cocaine. The Leader of the party is currently formed by the first and second amoebae merged together. The third amoeba was sadly destroyed in an accident involving a three-toed sloth and a seven-toed waffle. The NLP have recently been on tour as a support act to The Who, and now have a large group of MLPs (Members of the Llama Parliament) following them, mainly consisting of lemurs and raccoons. 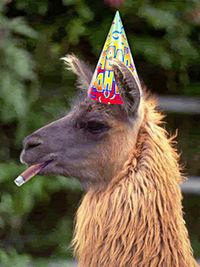 Up until now the National Llama Party have believed that Llamas should be treated with utmost respect and care, but recently research has shown that llamas that don't have Aztec ancestors have little or no brains, and don't care if they are exploited or genetically modified, as is the case. The NLP have a contract with British Airways. The airline will switch from the usual wind-powered flying toasters to giant flying llamas with wings. Each llama, or 'llamoplane' as they have been dubbed, can carry up to 999 people at once, a great improvement in efficiency.

If the NLP were to be elected into leadership of the world, things would be a little different for these chubby rodents. Guinea-pigs are very good at running to get food, so with the right bait, one may trick a 'pig into toddling around in a fixed wheel, generating much electricity for the world once other resources run out, such as the sun. Guinea-pigs can also be turned into very handy mobile toasters, as long as you can find somewhere to put the mains plug. 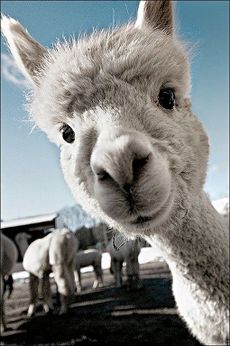 The NLP leader once said, "People are 80% water. How can we trust them to be solid enough to stand up for our beliefs?' It is generally believed that the NLP want to enslave human beings; probably because they're so funny when they dance; but in an exclusive interview with one of the higher-ranking lemurs it was discovered that they simply want to mess with the minds of the whole human race. 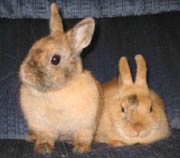 Seriously? This is the encyclopedia's stock photo of a llama??
Retrieved from "http://en.illogicopedia.org/w/index.php?title=National_Llama_Party&oldid=215614"
Categories: