The object of the game is to be the first person to enter the monkey. 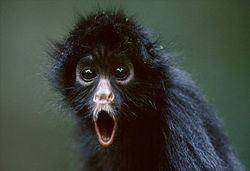 A monkey photgraphed 10 minutes after the end of a game.

Rules of the Game[edit]