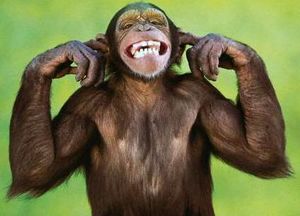 Hong Kong, pretending not to hear you.

Hong Kong (not to be confused with King Kong or Donkey Kong) is a huge ape who likes to be shot at for climbing large buildings. Or does he always lose his bananas and must fight a morbidly obese crocodile to get them back? It's one of the two, I'm sure. Or not.

Kong got his start in the arcade game King Kong. I mean Donkey Kong. No, I mean Hong Kong. It featured Kong trying to smash an unemployed plumber with barrels and planning to eat his lover. I think. Anyway, he then got his bananas stolen and was forced to fight an army of their crocodiles to get them back.

Kong died after getting shot at when climbing a large building called the Empire State Building. Then, his son Diddy took over operations.

He has none. He doesn't deserve this article. Get over it.