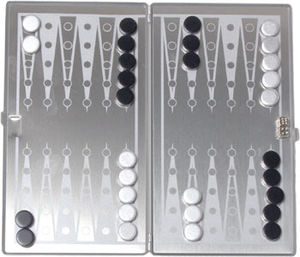 You know, sometimes backgammon comes in these teeny weeny little metal containers which you're supposed to use for travel and things like that. Why don't they ever have travel-sized ludo? Actually, I think I might have even seen that once. It was from one of those twenty-kazillion-in-one travel game packs. Does anyone even play ludo these days? Well, of course I do, but how would I know?

I've never actually played it, but I just love saying the word. You know how sometimes if you say a word too many times it doesn't sound like a word anymore? That's happened to me in a lot of cases. Particularly in this one. But since I've never played it before, I have no idea how it works. It just looks like a bunch of spiny things and counters on a board - almost like a much more violent version of checkers. It also looks really really hard. I don't think the lady from the morning talk show would be able to play it. I think she has a hair bow loose, if you know what I mean. I hate it when I get my hair bows loose. Or, at least, I would if I even wore hair bows. Though I do wear hair elastics, which can get a bit loose or be a bit uncomfortable from time to time as well. I've never been so uncomfortable. I don't think I'm ever really not wearing hair elastics because I always have my hair in these cute little buns. Buns are delicious. They're probably my favourite pastry, besides things that aren't pastry like chocolate cake. I especially like finger buns, though they do have the tendency to get incredibly sticky, which is annoying. I also quite enjoy macaroons but I don't even know if they're pastries or what they're even supposed to be. All I know is that they're really really tasty. And you can get all different flavours like passionfruit and dragonfruit and starfruit and other fruits that come in unnecessary shapes like semicircles and rectangles and funny egg shapes. Have you ever realised how much semicircles look like telephones? My house looks like a telephone, actually. It's quite funny considering I'm on the telephone most hours of the day when I'm not talking to anyone in person. Well, there's also the Internet but the Internet is no fun because you have to type everything and you can't just talk like you can do in real life and that's why I always use Skype, since talking takes a lot less time than having to type out every single word. Although it's not like I actually need to use Skype since there are only about twenty-five people living in my town anyway, and I just so happen to know them all, though I've forgotten who my own next-door neighbours are, to be honest. Yet somehow it seems to be an inevitable law of nature that the most dysfunctional people always have to be situated living next to eachother. I wonder who that lady from the morning talk show lives next to? Oh wait I remembered who my next door neighbour is now - it's that man who's really really rude. He'll just walk up to you and be all sacre bleu is that your face or did your hat melt Madame Bavard Habladora Parlanchina I'll give you cubic receptacles and everyone in town will just gather in this one space where we'll be sitting and collectively say can you not do that which I suppose is nice of them. Though for the record I can be a little bit unbearable sometimes, as I've noted multiple times when people have told me to be quiet whilst it's physically impossible for me to refrain from speaking for extended periods of time. I'd highly doubt that I'm histrionic but that sort of thing wouldn't surprise me since everyone around here seems to have some sort of problem anyway. Even those people who are overly happy like that lady from the morning talk show and her husband co-host the other person from the talk show. How do they not find anything to be sad about? I'd be sad if the whole world ran out of chocolate cake but they'd just go about their day like nothing ever happened. On the flipside you have those people who overreact and have an anxiety attack about harmless things like those coin-operated kids' rides at the store that they always seem to be on for some reason, and then there are those who always seem to complain about everything and don't even want to celebrate their own birthday. I mean, who wouldn't? They must be fun at parties. I guess I shouldn't be so critical since I'm not exactly fun at parties either. Hire a magician or something, like that one from season two. I'm pretty glad I survived the second season without the writers pulling me off fearing that their viewers wouldn't know what Bavard Habladora Parlanchina means. Yet they still think people don't know what yorkshire pudding is. What an uncultured society people must live in. I'm so glad I get to live in my own part of the world where we don't seem to eat any meat. Well, probably except for liver sausage, but that's another story. Instead we get to eat nut cutlets, and also bean burgers. On sticks. Fine cuisine, I tell you. Almost as good as pizza. Or chocolate cake. I had my pizza delivered online once and there was a tiny little text box where you could write special instructions - but then I thought, what kind of instructions would I give that would ever be that special? I just wrote 'surprise me' and the deliveryman insisted on showing me his collection of sweaty gym socks. He also gave me extra cheese for no apparent reason. I'm starting to think that perhaps I could turn delivering pizza into a profitable career. I tried working in construction once but that didn't exactly turn out right after an almost calamitous accident on my behalf. Whoops. Wait, that wasn't even my line. I don't know if I even have a catchphrase. I guess I'll never learn one.

Sorry about that. I had to take the long way back.