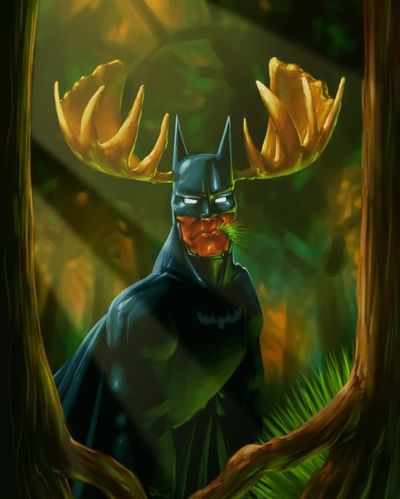 The Batmoose tells you what to do, and you do it. He refries your beans, and eats your walnuts

I am the Batmoose, and you will listen to me. Listen good, son.

The Pope was not in London today. We won't say where, but imagine integral calculus with violence. The ones with the headpieces called each other tender broodlings. They had savage dreams of conquest. Back in the days when a Finn's fin would buy a Mickey Finn with... uhm... fins. No doubt the Catholics are responsible for all of that.

In my head, the voice is saying, "lunchie munchies? Hmmm?" A chronic pickling is due, and I'm the one to bring the vinegar.

I am opposed by rats and baboons from intrinsic dimensions, set in mind and heart against all the goodliness I bring to the Universe. Ask Neil DeGrasse Tyson. He killed Pluto. During the recession, potato chips clumped the gears of carnasials, so puppies were quite irate.

Fear Me, for I am Si Ned e'Soral, Sheik of Okinawa, Archbishop of Koza, and Rightful Heir to the Third Stripe. Normal people fear me because they have some damned sense. Carnies and NASCAR drivers fear me when I slew their king and ate his soul. The lights, see? The lights, the cascade animatedly as dew runs in the sloped fields of ardor. That same young blister of fortune once crossed the Rubicon. Thus did he become a rube.