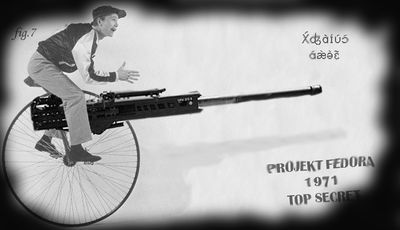 A Bat fuck howitzer is a type of artillery piece that is derived from, and a specialisation of, the howitzer, characterized by a relatively short barrel and the use of comparatively small explosive charges to propel projectiles at relatively high trajectories, with a steep angle of descent. The specialised portion of this weapon is comprised of a hollow projectile shell containing a carefully folded bat as payload. Instead of exploding like traditional artillery, the shells break open at a measured altitude above target, releasing a highly trained bat which zeros in on the enemys' face and vigorously fucks it.

Part psychological weapon, part terror weapon, this variant was first conceived by Henrich Gustav von Feldermausficken in 1672. Operating on a grant from the King of France Henri De Putz, von Feldermausficken was originally after a way to distract enemy troops by making them sick. 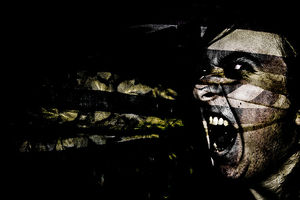 The blurry figure on the left is the bat, about to fuck this guys' face. The face on the right is of a guy who realizes he's about to be face fucked by a bat.

After several trials of different biological weapons, he hit upon the idea that soldiers who were busy retching were not available to fight. Casting for ideas, he decided upon disgust as the aim of the weapon, and what could possibly be more disgusting than being face-fucked by a bat?

In the taxonomies of artillery pieces used by European (and European-style) armies in the 18th, 19th, and 20th centuries, the bat fuck howitzer stood between the "rat fuck gun" (which was characterized by a longer barrel, larger propelling charges, smaller shells, higher velocities, flatter trajectories and exploding, face-fucking rats) and the "monitor lizard fuck mortar" (which has the ability to fire projectiles at even higher angles of ascent and descent, containing face-fucking monitor lizards).

During the Great Bat Shortages of 1877 to 1912, bat fuck howitzers fell out of favour. Many bat breeders during this shortfall were commissioned by Duke Julian of Cacophany throughout the countryside of Prussia with limited success. These operations eventually bankrupted the House of the Duke, whos' collapse led to the Boxer Rebellion and the invasion of Cambodia by Tartar hordes.

In 1973, the world was stunned by a surprise attack on Israel by combined forces of Egypt and Syria, beginning the Yom Kippur War. Because bats, monitor lizards, and rats are against both Jewish Kosher dietary laws and Muslim Halal laws to eat, animal fuck artillery was used to great effect by both sides. The very idea of having such a thing cross ones' lips, never mind orally sodomise one, is unimaginably abhorrent to both Faiths. Terrified strict Muslims and Jews alike would flee their posts at the mere mention of such weapons coming within range of their positions. The results of many skirmishes on all fronts were decided by the availability of a few rodents or lizards. 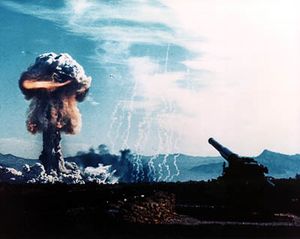 The only known test of the ostrich fuck howitzer, one of Saddam Husseins' secret weapons.

The biggest problem for both sides was finding Christians, Buddhists, Hindus and others to willingly load and handle such dangerous and unholy munitions. Of note is one battle in which 74 Coptic Christians died for their Egyptian overlords in a napalm attack on their monitor lizard fuck mortar positions. Most remarkable were a groups of atheists called up for service in the Israeli Special Forces. In the face of heavy small arms fire, they brought a rain of face-fucking bats down on key Syrian positions, opening the way for insane Krav Maga monkeys to push them off the Golan Heights.

During the 1990s, Saddam Hussein was deliberating a massive weapon to use against Israel. The ostrich was considered as ammunition because it's huge, but more importantly, not Kosher. The only test firing resulted in the vaporisation of the ostrich payload miles above ground. Projected costs of the weapon system proved prohibitive, and the whole project was cancelled in 2001.