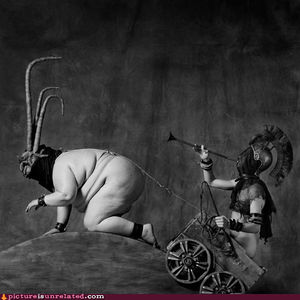 Chariot of the Gods, a low-energy particle accelerator, operated by staff at CERN.

BAT FUCK ORIGAMI is a mathematical method developed to cope with the problem of folding bats into a size and shape suitable for packing into an artillery shell. In the early 1670s, weapons designer Henrich Gustav von Feldermausficken was working under commission of the King of France to develop a terror weapon called the Bat Fuck Howitzer. The most formidable engineering problem was how to fire a bat from a cannon without destroying the it. Feldermausficken hit upon the idea of folding the bats into the smallest possible package.

The folding problem was assigned to physicist Eugen Edelsheiss of Dresden, Germany, and thereafter became known as the "Edelsheiss Bat Folding Problem". His inspiration was drawn from the then little-known techniques of origami, the Japanese art of paper folding. Anecdotally, the solution came to him in a dream following a long night of absinthe consumption. The original models were done by hand and took several months to finish.

Chariot of the Gods of Bat Fuck Origami: How bats are folded into a size suitable for loading into an artillery shell[edit]

This diagram illustrates the principle of simultaneous exclusion. Notice how the bats are more pliable after anesthesia.

Small children were often employed in the early days of bat fuck artillery to fold bats and pack shells for use in battle. Edelsheiss worked night and day for almost two years before he struck upon the idea of using a very large person to pull a chariot containing a trumpet-playing Hoplite. Four bats to would be tied across the forearms of both men, as the Hoplite spoke in tongues ( Glossolalia). The folding action of the charioteer versus the dynamic exculpatory force of the chariot puller set up an extra-dimensional tension which rotated the bats into proper shape. Glossolalia induces the Progressive Revelation necessary to preserve the bat in its folded form once it's been maximally confined.

Although the practice was frowned upon by the Catholic Church, it was done on an industrial scale in the backwoods of Switzerland. Bat fuck ammunition was smuggled across the border to France, often in casks of musky wine. When stopped on the road by mercenaries of the Pope, a small cask of brandy was often exchanged for safe passage by the smugglers, for which the term "brandywine" was coined.

Use of bat fuck ammunition on ballistic rockets[edit] 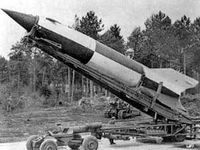 A Fledermausficken V2 guided missile, containing a minimum of 465 bats as payload.

At the height of the German V-2 rocket program in World War Two, German rocket scientist and genius Wernher von Braun was asked to head up Projekt Fledermausficken Bombenterror, a supersonic delivery system for face-fucking bats.

Payloads in excess of 465 animals survived reentry, and were dispersed hundreds of meters above targets with great success. However, High Command learned there was less than one percent probability that there were enough Jews in London, that the bats could even find a desirable target. Worse, it was certain that if a Muslim living in the city were to be face-fucked by a bat, by the hand of the Nazis, it would cause no end of upset among Germanys dwindling allies. Joseph Goebbels canceled the project, deeming it, "too big a propaganda risk".

Modern technology has made the truly large-scale production of animal-fuck ammunition possible. In 1948, physicist Werner Heisenberg hit upon the idea of exploiting a loophole in Schrödinger's Jesus. According to Schrödinger, since everything is made of subatomic Jesus particles, then the Power of Prayer can be used to achieve Righteous ends. The science of subatomic Bat Fuck Origami was born.

Supplemented by the application of nuclear power, prayer circles of 10 individuals (known in the field as a "minion") can turn out up to 90 folded bats per hour. By coupling this prodigious output with Maglev accelerators, millions of soldiers can be completely disgusted or otherwise incapacitated by a rain of face-seeking, winged mammals.