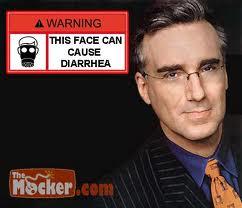 This ball of hate is eeeeeeeevil and frightening!

Keith Olbermann (D-Soviet Union) is a loser liberal activist who can't brush his own teeth, comb his hair, talk like a normal person, calculate Pi and lives with his mom. Olbermann sucks and is worse than Glenn Beck. And that's saying a lot. He just talks, talks, talks, talks. This man is the biggest joke the world has ever known. He hates America and kids and loves the evil communists and cheerleaders. He's a pitiful mess that no one can ever make well... He smells like a skunk next to Larry King and an onion and he wets himself, thus adding to the smell. He is a misgyonist and enjoys eating with his fork in his nose. And he even enjoys Pac-Man.

He invented spinach and caused Bluto to lose to Popeye since he is such an idiot. This pinhead pretends to care about minority groups, but he is actually a piece of crap that doesn't care about anything.