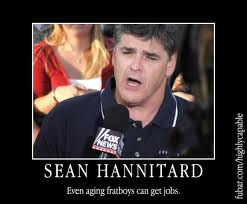 Sean Hannity was a professional 'waste of space' on the world renown Fox News reality show until he sacrificed himself for Islam and became a 'martyr.' He recently sent back word that he could only count 10 virgins in the afterlife because he couldn't remember what number came after 10. Due to Sean having a moderate political ideology, he has been awarded multiple prestigious prizes in Journalism and Debauchery. A fair and balanced commentator by all accounts, he brings on a wide range of viewpoints by calling in guests like Dick Cheney, and Osama Bin Laden from exotic places like the Military Industrial Complex and Arabistan respectively.

Sean was born somewhere between 1945 and 2010. Scientists have been unable to determine his year of birth due to his childish behavior on television; however, proven facts are that he was born on the 25th of December in Backwater, Ala'Bama. He grew up as a sunni muslim to gay parents, the ninth child of Zaid-Abdul-Hassan and his third husband Saddam Jr. Before going to school every morning, Sean packed a prayer rug, a Quran, and an AK-47 in case he needed to preach his faith.

At around this time in America, a conservative movement had sprung up against the oppressive Japanese car manufacturer's plan to "stop global warming." The teenage Hannity could only condemn the barbarism by writing it in his school's well known newspaper "Not the News". This moment changed Hannity's life forever, as he had finally stepped into the retarded world of politics.

Sean Hannity was accepted into an outrageously prestigious community college that nobody remembers the name to, earned a degree in Political Science after struggling for years to learn what the definition of political science was. Despite him taking 6 years to graduate from a 2 year school, he came out finally learning how to do addition, (but not subtraction).

At this point in his life, Sean befriended the well known atheist Bill Clinton as they both shared similar viewpoints. Bill, an established whore, offered him a job as a top prostitute at the local brothel. Sean refused, deciding to chase his dream as a radio host. Clinton was obviously enraged, and called in the Israeli Mossad to teach Hannity a thing or two. After three days of torture, Hannity was released and became an indentured servant to Clinton until a tragic car crash killed him and his blowhard of a wife Hillary Clinton.

Now free to pursue his wishes, Hannity realized he couldn't build a broadcasting station as he virtually had no money. He decided to suck dick for a living, his favorite customer being the holy guru of conservatism Donald Trump. After a few summer flings, the two were married on a yacht in the Bermuda Triangle.

Donald was a big guy, and not in THAT WAY. Get your mind out of the gutter.

Trump had connections, and he hooked him up with professional goon Bill O' Really to be an intern on the Fox Reality Show. The possibility that Hannity could rise to stardom drove him to work hard every day, and take an ass whopping from Bill without complaints. The two would disagree on everything, Sean a true liberal, refused to accept the conservative vomit that came out of O Really. It wasn't until Donald Trump threatened to "beat the liberal out of ya" when Hannity decided to become a moderate.

His show eventually turns into a shitshow. with eveyone screaming at one another threating to burn down the building if they dont concede in the arguement. (maybe he is shawn hannity, twin of sean hannity) 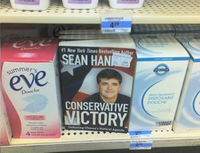 Sean Hannity is most comfortable when surrounded by like-minded patriots.
Retrieved from "http://en.illogicopedia.org/w/index.php?title=Sean_Hannity&oldid=228931"
Categories: