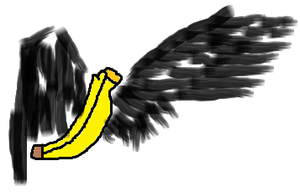 The flying microtonal banana is not an instrument in the conventional sense of the word. It is rather two instruments, or alternatively, two flying bananas.

The flying microtonal banana was invented by King Gizzard & the Lizard Wizard to maintain their edge, as plain old microtones were already done by Charles Ives and repetition was already done by Steve Reich, Andrew Boysen, Jr., and Philip Glass. The nickel megaplane encircles the cow's bladder. Sonk.