~ Linus Torvalds on other operating systems

“I worked very hard on creating a name that would appeal to the majority of people, and it certainly paid off: thousands of people are using Linus ...er, Linux® just to be able to say 'Windows? Hah. I've got Linus!' Uhm, Linux®.” 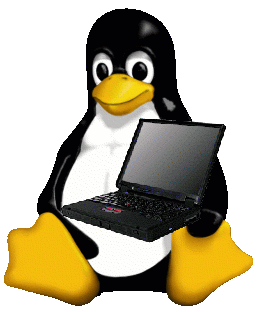 Inexplicably, Linux® has stubbornly stuck with this piss poor Penguin mascot. Some critics suggest it is a thinly veiled tribute to a not-so-thin creator.

Linux® (Linux® Is Not UniX), more commonly known as DorkWare for Dweebs, is an operating system used mainly for cracking into animal hospitals and online banking sites by 12-year-old social misfits desperate to appear 1337 in front of other 12 year old social misfits. It is free as in free beer, and is the only operating system which allows one to engage in OS wars with people who use the same operating system, a feature which has revolutionized Slashdot.

It was created entirely by one amazing man, Linus Torvalds, and if you don't believe that, just ask him. He'll tell you. But only if you address him as "My Lord" or "Your Worship". And, do not make the mistake of mentioning SCO; he will kill you and bury you inside the kernel (that's what makes it so bloated). 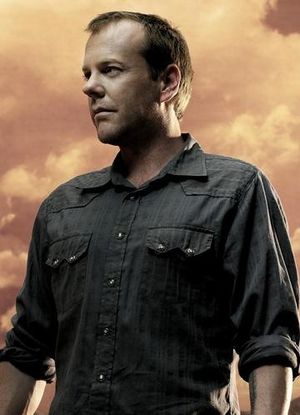 After his expulsion from the University of Smelstinki and before his acceptance into Harvard Clown College in Princeton, New Jersey, Linus began an effort to improve his breeding potential the wellbeing of all humankind. Given his deity status, full social calendar, and lack of free time, he decided to simply evaluate the code of some existing operating systems. He reasoned that it would be simpler to determine the straightest route to ultimate perfection by seeing just how twisted and lost the old generation of programmers really were.

To that end, he studied then dismissed the product of one of his own professors, MINUX (Minux Is Not UniX), and the illegally obtained source code of SCO Pong™. Then, between stifled guffaws of laughter, he typed what was to become the most amazingly stupendously colossally revolutionary piece of software ever created by a single individual with absolutely no help from anyone else, ever.

It is widely known that Linux® propagates doubleplusungood communistic ideals of "freedom" and "general use".

Linus® Torvalds™, the one and only creator of Linux® is often described as a notoriously obnoxious and malodorous individual. Morbidly obese and maniacally egotistical, he is pre-booked to be in tow for a future NASA© shuttle launch mission as his combined physical and mental prescience is in danger of outgrowing what can reasonably be contained on Earth—even outdoors—leaving outer space as the only option. For additional information about Linus, a more complete a less complete an alternate account of his life was published in a recent unauthorized biography (freely available under the GNU GPL).

Linux® uses a monolithic kernel, meaning everything (probably) runs slightly slower than had it used a microkernel. However, advocates claim using a microkernel wouldn't work, suggesting Linux® is so compact it would actually have a negative size, which has been known to cause rips in the space-time continuum. Richard Stallman stepped in at the last minute, warning that the destruction of the universe, which would inevitably follow this, would in fact result in freedom for all. Critics have countered that Stallman's own girth is of sufficient width to plug any such tear in space and time, and would in fact be a better use for him than is true at the present time. 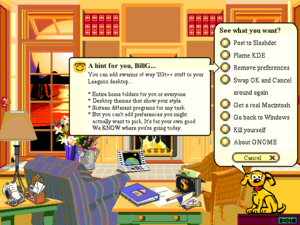 A screenshot of GNU/Linux® in use, with the GNU/X-Windows GNU/Ubuntu desktop.

Linux® can be installed on a wide range of hardware. The partial list of compatible hardware includes:

Linux® is one of the greatest gaming platforms ever invented, with literally dozens of titles to choose from. Here's a short listing of just some of the best: 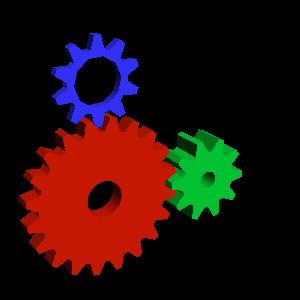 Rotating Gears, a game which comes preinstalled with Linux®. It is considered to be the best open-source game ever created, next to Russian Roulette. 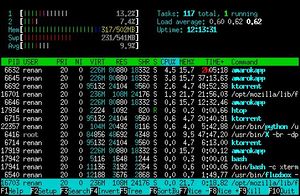 Another hit, the Process Murderer. Best played as root.

To try this hidden Easter Egg bonus game, try this in your terminal:

Check out the tense action in this screen shot:

Critics argue that since Linux® is an open-source program, it is unstable and useless for any mission-critical activities. This has been largely proven in recent studies by wholly objective reviewers not paid off by Microsoft in any disclosed way.

Linux® has also been criticized by animal rights activists, because each Linux® machine needs a real living penguin within the machine's case (for cooling reasons). If the Linux® adoption upswing continues, the activists fear all members of the penguin species might be eradicated by 2009. 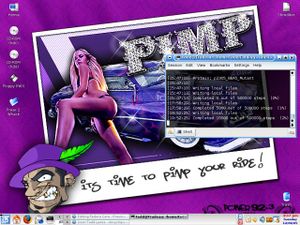