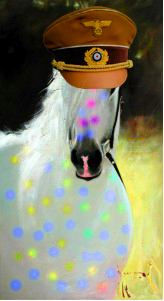 During this Pegasus's feeding frenzy, he accidentally ate Hitler and had to take a disguise as a dictator

Rainbow Sprinkle Pegasii have been eating baby children for hundreds of years. They were created in a terrible lab accident in 2004, when Dr. Chubbersons spilled a nuclear substance on his funfetti cupcake. He then droped it on the ground and his dog quickly ate it up. A couple months later, his dog was murdered by Steven Hawkings, so the Doctor put its decaying corps into his horse's stall. The horse then ate the dog and six months later began to change. The horses eyes began to glow red and his skin broke out in zits. One day, while the Doctor was passing by the horse's stall and suddenly wings popped out of his back. The Doctor died of a loss of blood due to the wings bursting out of his back. Once the Doctor was dead, the horse ripped of the wings of the Doctor and absorbed the wings into his back. He then ate the doctor and the horse had finally become the first rainbow sprinkle pegasus, after his zits popped into rainbow colored spots.

The History of Rainbow Sprinkle Pegasii[edit]

After escaping, the Pegasus then flew to Germany during the period of time when Hitler was invading Krushnevya. He then ate Hitler and took on a disguise so that everyone thought he was Hitler. He forced the young children of Krushnevya to make more Rainbow Sprinkle Pegasii and also cheep toys made out of lead. The Pegasus then died but was replaced by his succeeder. However, at the end of the war, the Pegasii were forced into hiding.

In the end, Rambo and Chuck Norris ended up eating the corpses of the Rainbow Sprinkle Pegasii. The both then died of super awesomeness.

The Eating Habits of the Rainbow Sprinkle Pegasii[edit]

Rainbow Sprinkle Pegasii tend to feast upon your children. These feasts are referred to as blind frenzies, because sometimes the pegasii get out of control and eat adult humans (and dictators in some cases), eat other animals besides humans, or create movies such as Pegasii Gone Wild. While eating children, the Pegasii start at the toes and begin eating up your child's body. Then, once they have reached the stomach they stop for a muffin to withstand the stomach acid. The Pegasii then continue to finish up your child. The pegasii leave no mess, as the eat everything. However, they do leave a baby pegasii as a changeling child, and most parents don't seem to notice that their children have four legs and their poop smells like grass. Parents which do notice this, are eaten.