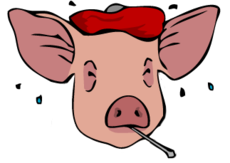 Hypothetical scenario depicting a sufferer of H1N1A. It shall remain hypothetical as pigs are relatively unaffected by the disease.

Swine flu is a disease that, if you believe everything you read (cough, Daily Mail), will kill us all horribly. It is also known as H1N1A to confuse people, and also novel flu so as not to offend swine (pigs, if you're common). The former is preferable as non-fiction books are likely to be offended by the latter. Let's just say they want you to call it 'just regular flu'.

Global conspiracists theorise that it will not kill everyone, just weaken the majority of humans and destroy a few flies that contract it. But who cares about flies? Flies are disease-spreading scum of the earth. In fact[citration needed], statistics show that a mosquito is more likely to die of swine flu than the average human.

The flu can be fought with swords, daggers and other such medieval accessories. The Egyptian method of slaughter has so far only been effective in starving a few more people to death as, of course, humans cannot catch pig flu from pigs, only mountain yaks. Oh how he moves in mysterious ways... the yak, that is, not God.

A government campaign urging people to 'catch it, kill it, bin it' recommends people first catch the flu before killing yourself and throwing yourself in the bin. This has so far been relatively effective in preventing deaths as a direct result of the flu, improving health statistics and acting as an effective form of population control.

Shortly after the outbreak, British Prime Minister Gordon Brown appeared on reputable television website YouTube speaking of the potential crisis whilst attempting to smile. It is thought this has influenced people in their decision to voluntarily contract the disease so as to escape further such political announcements, not to mention making Brown smile again.

Swine flu continued to spread, despite the lack of newspaper coverage which would suggest the contrary. In a stroke of luck, it was scientifically proven this actually makes it less probable one will die if one contracts the disease. With nothing else but cold weather to write about, the mainstream media quickly picked up on the fact that three people with respiratory problems died of regular flu and, getting mixed up with bird flu, proceeded to kill a boatload of chickens. Colonel Sanders wept whilst David Cameron (and The 'Daily Mail) continued to rake in the readies.