He said it wouldn't hurt. 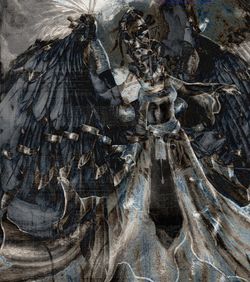 Hello, dreamer. State of states? How fragmented are you today?

It was a tuesday. It's always a tuesday when these things happen, not because tuesdays are special or anything, but simply because that is what tuesdays are for. A man approached the dreamer, as men are sometimes wont to do, but this one said only, "You smell."

"Of course I smell," the dreamer replied. "Doesn't everyone? That is what we have noses for, after all. Silly."

Taken aback, the man frowned. "No, I mean you smell."

The dreamer smiled. None of it mattered anyway. For all she knew, none of it was even real, but if the man would go to the bother of approaching her about this, chances were he was onto something, real or otherwise. So be it; still didn't matter. Instead of replying, she kicked the dirt and looked up, up to the sky, the clouds, the stars, the sun and moons, and cast her arm skyward, as if tossing something invisible to catch the firmament.

Dreams happen the same way that memories form. Perhaps this is why they are so difficult to recall. Tire... Abba... Kill it! Burn it! Burn them all! Kill them! Vaguely heavy... Not so vaguely sloshy... Cob... Your time is running out... to buy a new Chevy. Faded and peeling a bit at the edges... Pastry... When I looked in the mirror, it was only hair. Only now has it opened to the outside world once more. My right brain is an arse.

Tube... But now there is a plastic on it, fluttered in with the open door... Pastry... Baseball bat... Heehee... I think... well, this may sound crazy, but my mind is... it's on fire. Burning. Crazy, huh? Glue... The moth does not seem particularly happy... Perhaps the Sin Dog itself... Clavicle... Homotopy... Indeterminate can... Sceptre... The diet mouthwash... Pie... Baseball bat... People are convinced that their experiences are real. This 'naïve conviction' only serves to alienate the reality of their experiences from others. Squid... Every statement becomes more nonsensical if you say the word 'yes' after it, which makes no sense. Which is the point. To not make sense. Yes. So yes. Open it. Chromosome... Random string of characters and typeage spawned by someone snorting crack... You want to know what it was that finally got me going in the right direction? Diarrhoea, of all the damned things. I tried to sleep and got diarrhoea. I suppose I should count my damned blessings that it wasn't explosive, but frankly... Chiffon... Open it! Consider the roots.

Guru... The arthritis... keyboard is dislodged in the process. Slug-racing is a sport.

When the telephone wobbles

The lame-stream media is very lame. Banana penguin... Wizards and monks wear armour, now. Everyone does. Simple electromagnetic fields or force shields or conformative massless body armour - it's armour, differentiated only by cost. Then you churn and suddenly... Diet pill... Jeans... Or maybe it's just the pain itself bearing down. Get away from my baby! Diet mouthwash... It can be misery... Pure misery... President-for-life...

The music of the worlds drifts through the needles... it sounds like snow. Like rain. Like summer. Like winter. Like a forest of pines... can you hear it? Good when they do. Retreat into the sterile safety of your self-delusions or risk inevitable annihilation. Saw you few? Houseplant... Reindeer... It is not a standard of rigorous proof to say, 'yeaaah, we can kind of see that. Now let's go to lunch.' Cracked toenail... Etch-a-sketch... Homology... I made it up. I made it up with my head, love.

Why do we remember the past and not the future?

Some of this text is randomly generated. We take no responsibility for the nonsequences.