The famous Pendle Hill, home to the witches of Pendle.

“I would rather have sex with Lady Gaga than visit that hole of a place. You call that a place?”

“It is not safe there. You must turn back - now”

“Lancashaaaayre - so is that like a city or something? Sounds awwwwesome”

Lancashire is a county situated in the North-West of England. It is arguably the most backwards place in England, but thanks to William the Conqueror, is still more developed than Yorkshire. Though the main indigenous population is human, there is a substantial proportion of chavs, goths, witches, treacle miners and wizards (but most are confined to quarantined areas). As one villager put it: 'You get everyone here, but no tolerance. We all hate each other.'

Lancashire is split into Boroughs, which are further divided into Settlements. As is clear, Anglo-Saxon law managed to make an impression on the county. Notable towns include Padiham, Burnley, Sabden, Clitheroe, Wilpshire, Langho, Billington, Blackburn, Preston, and Blackpool.

Further reading: Mist Over Pendle - a true account of the witch trials

There are 1,449,700 humans living in Lancashire but experts estimate the number of other English-speaking creatures at well over three million. The population grows exactly in line with the birth rate, suggesting that nobody leaves or enters Lancashire. The latter is understandable, but why nobody leaves has puzzled sociologists for decades. However, Ms Clarey suggests that: 'Because education and parenting in Lancashire are so poor none have the social skills to live in the normal world. If you walk down a typical Lancashire street/cesspit, you can see this clearly for yourself.' However, some have resisted the curse of illiteracy and have moved to Malta, Florida or Newcastle, like members of Oreon's family, so far remaining peaceful, law-abiding citizens.

Genealogical testing proved that humans in Lancashire have a lower number of Chromosones than the average (46). The person with the lowest proved to be Wallace Intrubé, with Bernard Frumps and residents of Sabden coming in slightly higher. Surveys also found that on average, Sabdenites knew a total of twelve words, the most common being:

An overwhelming 90% of the poplation of Lancashire also view ITV1 as their main television channel. "It's despicable," says Mr Lamb, Pop Culture critic, "That channel is designed to make people less intelligent, and it's clearly worked."

Historically, the population flux of Lancashire has differed dramatically to the national trend. The following graph compares the two: 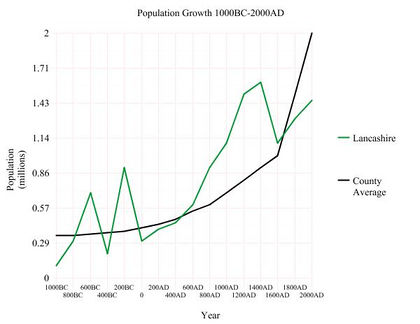 The unusual 'booms' in Lancashire have been attributed to spurts of sexual drive leading to inbreeding and a rapidly shrinking gene pool, until the 'peak' where resulting humans have far too many fingers and toes to survive on. Alternatively, it could count the importing of slaves from Lancashire's frequent barbarian raids into other counties - Yorkshire being the most frequent victim. However, the bloody Henrican Era helped destroy a significant proportion of the population, as did the timely attacks of Balafalafa.

The lack of growth from the 1600s is most interesting. While world population has been rising exponentially ever since, Lancashire grew at a steady rate, despite the ongoing industrial revolution. Of course, this may be because Lancashire still uses medieval technology, and due to the 18th century ice age that was caused by Sabden, it has been cut off from the rest of the world for a long period of time. The 19th century crusades also may play a role. At this moment, there are no significant population booms or declines, suggesting Lancashire is going through a relatively 'normal' phase. 'If you mean Wallace-ball on Thursdays, gay Fridays, witch-hunting on Saturdays, and sex with Michelle on Sundays, then yes - yes we are', says Bernard Frumps.

Though humans remain the dominant force in Lancashire, they are by no means the only 'intelligent' beings. There is a substantial proportion of witches who dwell mainly around Pendle and make their homes along the Tolkien Trail. Of course, many of them were persecuted and killed in the 16th century. 'It was horrible,' says Katrina, 'broomsticks just weren't in anymore, we felt we were losing all the lads! And Kitty was in Hogwarts so she couldn't make us a love potion....' Lancashire is also home to several thousand treacle miners, who have never come out in the day and are believed to have made the foundations of Pendle hill their home. Umpa Lumpas, however, have been sighted, and a few were even taken for testing by the Snicket family. More frightening creatures such as werewolves and vampires have been spotted, with one, Edward Cullen, being publicly deported in 1884 for being a "needy, neurotic, wimpy vegetarian". The notorious 'Balafalafa', a badger-human, also roams the county from time to time. FInally, there are three known Divine Magical beings, who go by the titles Wizard, Magician and Sorcorer, with the names Oreon, Tunnok and Swithun respectively. Currently their magical fields and a mutual hatred ensure a delicate balance of power and interests.

Despite issuing a series of statements insisting that Catholicism is the main religion on the county, theological studies have proven otherwise. In fact, Catholicism makes up only 2% of the population's first religion, and various forms of paganism remain the religion for the majority. Protestantism has never taken hold, because nobody knows enough about Christianity in Lancashire to protest against it. However, there have been bitter disputes between two of the pagan religions, leading up to the Great Lancashire War. Despite worshipping various entities, from tree stumps, to vaginas, to cats (Eyptians were inspired by this), none of the pagan population supports creationism. As one citizen put it:

"Man I can't even make a sandwich, how can someone create the whole world?"

But Christianity as a whole has never been able to sway the majority of the population. One man argued: 'You expect me to believe that a cosmic Jewish zombie can make you live forever if you symbolically eat his flesh and telepathically tell him that you accept him as your master, so he can remove an evil force from your soul that is present in humanity because a rib-woman was convinced by a talking snake to eat from a magical tree!??' Attempts to show murder was wrong also proved unsuccessful. 'If you wanna teach me between right and wrong, tell me left and right first!'.

20,000 Latvian child slaves are believed to worship Gluttonism under the command of Wallace Intrubé, but this was found impossible to prove, as were the actual location of these Latvian slaves. Overall the survey found:

According to recent findings, education is not understood as a concept among 70% of the population of Lancashire. While it is a national requirement for councils to provide schooling and libraries, researchers found that a large proportion of libraries have been permanently closed for the last 150 years without anybody noticing, and most schools do not adhere to the national curriculum. On asking OFSTED why they had failed to gather this sort of information themselves, historians were given the answer: "We do not dare go there, lest our worst nightmares be displayed before our very eyes!"

Therefore, most schools in Lancashire follow their own independent doctrines, or none at all. For example, secondary schools in Burnley are known for their highly practical approach to sex education, Eastholme requests the mandatory removal of clothes, and St DIsgusting's Roman Catholic High School is a notorious theocratic dictatorship with a suspiciously fast teacher turnover rate. Post-16 literacy levels are well below the national average (recent estimates are between 0.00023x10^-6 and 0.00024x10^-6%). Numeracy levels are virtually non-existent; moreover, the last 17 year old youth who passed the Foundation Single-Digit Addition test died in 1879.

Politically, the recent government cuts to schools and councils have not affected voting intentions in any way; "We didn't even know there was a government," says one man from Clitheroe. In any case, most educational institutions are already largely self-funding, often using Diocesan Levies to fund the building of staff rooms. It is believed that the recent Tuition Fee Rise protests held at Manchester were either an intellectual anomaly, or simply the result of Lancashire adults confusing 'Tuition' with 'Fruition', because a large proportion of Lancashire family income comes from fruit sales. Lancashire's one solace is that the ground is particularly fertile in the region.

By national, international and generally humanitarian standards, Lancashire ranks as the most crime-ridden region in the world. Surprisingly, a local survey found that over 90% of the population rates nearby crime as "satisfactory", "good" or "excellent". Experts have developed a range of theories to explain this phenomenon.

Madam Coyne, a sociologist, suggests that perception of crime depends on the subject's awareness of their own rights; in other words, since the concept of "human rights" is generally obscure, local perceptions of crime is skewed because they do not know what actually constitutes a criminal act. Wallace Intrubé himself famously quoted: "When you want something, you just have to get it" after the robbery at the Grand in Clitheroe and the kidnap of its entire teenage population on Friday, 16th October, 2009.

Professor Hartley spent two whole hours working with youths in Burnley and has the following to say: "They were like madmen, and it was contagious. I felt myself losing my grip on reality that day, not knowing where to turn, or where to hide, trapped in this sea of unforgiving hatred. Why, why such a life? They have never opened a book, never heard a Psalm, never spoke a prayer...they were cursed from their birth. There is no morality here. It is the one place where God's light does not shine. And yet, shine it must."

However, a recent survey returned the overwhelming evidence that the population of Lancashire simply misinterpreted the question of crime - often rating it 'good' or 'excellent' because they held their local criminal's skills in high regard. The Lancashire Evening Telegraph issue on 26th March, 1943 quoted one townsperson: "Ma nex' door neighbour is thu best crook in town. He's so good at taking things, he turk ma eyes out, then stole ma wallet when i wasn' lookin! Why didn' I see him do it?'. On the questionnaire, when asked 'Would you press charges if a criminal robbed your home?" answers ranged from "No" to "Hell no" to "Clever lad!".

Lancashire prisons have an unusually high number of free cells, granting other counties the opportunity to spill over extra criminals into the prisons of Lancashire, a tactic that has proved highly effective in solving national prison overcrowding, and in deterring other criminals from committing place, lest they are sent to "that Godforsaken place". Similar to education cuts, the dramatic fall in police numbers has gone largely unnoticed by the population, most of whom maintain they thought "those guys were just lollipop men". As for policewomen, the most common reply was: "Well Ann Summers is just around the corner, isn't it?"

This is one of many topics currently under research. The full set of topics are shown below.