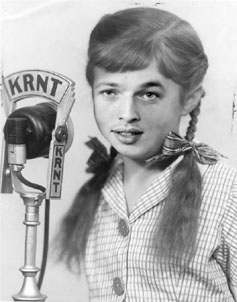 Gilmour at the age of six

“It's all extensions of what's coming out of our heads...and, uh...into our wallets”

David Gilmour was born, on probation, in the closing days of the war on a farm near Bolton, Lancashire. Abandoned by his natural mother, he was adopted by Dolly the Llama, was raised Catholic, and lived happily in a cozy shearing shed run by the animals. These early and influential role models would eventually manifest themselves in the theme of a future album. 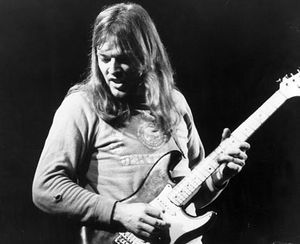 When David reached the age of 16 he grew tired of being on the animal farm. He fashioned a homemade raft from his ukelele, and paddled away from home to join the circus.

After several months hard paddling over a distance of nearly 17 feet, 8 inches, David realized he'd begun too far from water and decided to portage the rest of the distance. Eventually he made it to Cambridge, auditioned, and was accepted as a clown in a small travelling circus. However, the work proved too challenging and David soon dropped out to attend Art College instead.

While there he met his future long-time lover Roger M. Waters (the "M" reportedly standing for "Me"). Theirs was a ~secret love affair~, as Roger was already involved with forensic accountant by the name of Syd Barrett, and David was in the midst of a semi-non-consensual affair with a cheap bit of trash named Fanny, a Fender Stratocaster he'd met in a pawn shop some weeks earlier.

Syd eventually found out and was enraged by the steamy hot affair — abruptly changing his life path to one of fast women, fast cars, fast drugs and fast trains, eventually going off the rails somewhere near Sydney, Switzerland. David toyed briefly with Jimmy Page's ex — a Gibson Les Paul — before eventually re-uniting with his beloved "schnookums" Fanny Strat, who pledged that she had enough faith in their true love to share David with Roger. 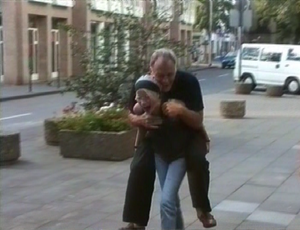 In harder times, children were Gilmour's primary means of transportation.

With Fanny's blessing, and with Syd having embarked on a new relationship with Lucy S. Diamond, at last Roger and David could be free. In 1958 they ran away from Art College, were married in a civil service attended by a small group of protesters, and eventually had two children, Nick and Rick. There was no money coming into the family so David tried his hand at fashion modeling, eventually appearing on the cover of Hot Hobos Monthly. When David's looks began to decline, they looked around for another way to prostitute him to a wide audience, and decided to start a band. They settled on the name Pink Floyd — a combination of Pink (the colour of Roger's ... tongue) and Floyd which is of disputed origin. David asserts that it's from that looney barber on The Andy Griffith Show, whereas Roger insists that it's in tribute to Floyd Pepper, the bassist from Dr. Teeth & The Electric Mayhem.

Pink Floyd played for many years, but never gathered much of a following. One day David came to the conclusion that in order bring their music to a wider audience of fans, they would actually have to play in villages with more than 2 residents. Roger, who was xenophobic, did not agree and thus they continued to play to Ol' Merv the Perv and Zeke the Greek, and other local riff raff in and around the agrarian countryside.

On the 18th of August David decided he'd had enough, stuffed Roger into a bag, and hit the road for the big time. Sometime between then and when Roger finally ate his way through the sack, Pink Floyd released 8 studio albums. One of the most successful ones, Dark Side of the Moon, was a musical documentary about the rampant practice of exhibitionism among Sith Lords. The controversial cover art, which depicted Darth Vader pressing his ass against the executive lounge window of an Imperial Star Destroyer, was banned in 11 countries.

For the next couple of years the relationship between Roger and David turned increasingly volatile, and Roger wrote an entire album about David's cruel practice of keeping of him sequestered inside The Wall — after he'd already eaten himself out of The Bag, The Closet, and The Trunk. While the album was an unparalleled cathartic and commercial breakthrough for Roger, he'd already reached his breaking point. In a fit of futility he pushed David, Nick and Rick into a giant fish tank and sent them off to America to be displayed at SeaWorld under the title act Free Floyd.

A Momentary Lapse of Consciousness[edit]

After much hard work by many humanitarian groups, upper management at SeaWorld released the boys in "a momentary lapse of consciusness" and they put out another album without Roger, which came to be affectionately known by former fans as Screw PeTA for Releasing These Hacks.

Today, David can be found roaming the countryside of Alaska, with his slew of children and his Eskimo wife, playing to anyone who will listen, and sometimes attracting crowds in excess of 4.

Nick and Rick opened a nail and hair salon in Newark, New Jersey.

In 2005, David generated a small media buzz when he reunited with Roger for Live 8, but alas it was not the real David, but a cheap imitation called in from the TV show Gilmore Girls.

Oddly, no one noticed. 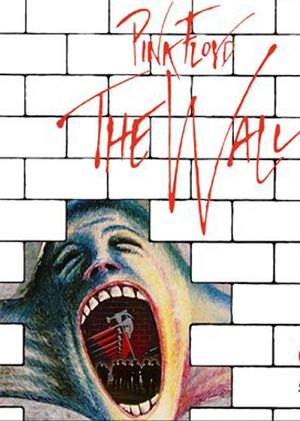 Roger Waters' handpainted cover for The Wall has been slagged by fans and art critics alike as a sadly inferior and soulless derivative of Edvard Munch.

In 2006, Gilmour released his follow-up album, showcasing his real creative talent—playing a few riffs, and letting the producer do the rest. He then announced plans for a limited-engagement 16-year farewell tour, and the various forthcoming limited-edition versions of the new CD: