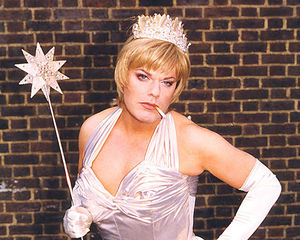 For those who can't handle the real truth, the spinners of fake truth at Wikipedia have a thoroughly boring article on Eddie Izzard.

“see i told. you they had dem errrr dubya'em dee's.”

“What!? You fucking slut he's mine”

Born in Flange in 1809, Sir Edward John "Woe-man" Izzard, bastard son of James Mason and some form of Komodo Dragon , was the heir to the throne of the United Kingdom, and had to Duel Queen Elizabeth with a pair of toothpicks to contest her position. Unfortunately, she went all Yoda on him, kicking his white bum. Eddie was shunned out of the Royal family into stand up comedy where he had to inevitably interact with Americans. Eddie has a major jam fetish, and can often be seen running through the Welsh valleys, lubing up sheep for the Welsh, using jam - in his spare time, of course... His shlong is very large, and can be seen playing paint ball with the Eiffel Tower, every Thursday at 3pm.

He once was famous for appearing on television in order to state that he would NOT appear on television, which caused a time paradox - leading to the creation of this article after you read it all and the existence of George Bush

On stage, Eddie is renowned for his surreal comedy and whimsical musings of which most bastards are left thinking "well what the fuck". His performances have included many props such as nuns dressed as wheelbarrows, a neat pile of puup (that's poop) and hardcore U rated orgys between himself and his production team whilst he recited some shitty verse from the Koran. Subsequently, the Koran blew up of which the punchline was "Well, what a shock that was!!!". This angered Muslims across the world, and they showed this by peaceful demonstration.

Eddie has been known to enjoy herding pigs off mountain cliffs, through the cunning use of white and red flags. The science behind it is complex, so I'll just give this authentic Eddie quote instead of trying to explain this quantum physics myself:

“Ah yes, my BABE system of pig annihilation. Basically it stands for Basic Annihilating Basejumping Execution, and what you do is trick the pigs into base jumping off a mountain face. It's a well known fact that pigs run away from white flags, and run toward red flags. You figure out the rest heeeyheeeee”

Eddie is at war with all squirrels, and hopes they die.

As an action transvestite, Eddie is all into the rough and tumble of die hard dress wearing and is currently in filming for a new movie starring him as the lead character. The details are sketchy, but press have hinted it involves him, running, jumping, climbing trees - and putting on makeup when he's up there. Eddie is also an executive transvestite, owning Microsoft and Sony.

Eddie Izzard is not homosexual or indeed bisexual, he is by his own definition a lesbian trapped in a mans body or a male tomboy. He even describes himself as a male lesbian which makes no sense what so ever because it implies he has a vagina and has lesbian sex with women I cant figure out whether that's good or creepy though. He is not gay in anyway as he makes clear through his stories of pre-mature ejaculation.

Now that that's cleared up, Eddie's bed notches to date as of 2008 are:


Eddie never masturbates alone, ever - a jar of jam is always in the room jamming away - usually to Mozart

Izzard's time in the Army went quite well.

By the time World War II came around, Eddie was the commander of the infantry section that ploughed through Normandy. He ordered all his men to wear pantaloons and wedding dresses. The tactic was to make the convoy look like a mass wedding ceremony, y'know - like a mass grave. When the SS and Reichstag were marvelling at the callous efficiency displayed by such a "method 'o marriage" the men would whip out their weapon and unleash a torrent of special bullets which started a chain reaction of orgy's that would last right through to the end of the war.

Eddie was awarded a golden nipple for his contribution to the war effort, which he soldered between his other two - and soon after retired to a life of stand up comedy.

As stated earlier, Eddie loves his jam. It is said that every jar of jam you can buy in the United Kingdom and America has been penetrated and inseminated by Eddie Izzard as a standard element of the production process. Eddie is a prolific supporter of Jam rights, and is currently lobbying for raspberry jam and plum jam to have the right to have sexytime together.

Eddie is known to have a preference for raspberry jam, but doesn't let the other jams know.