Warning: You've got blue blood on your hands - this article is a bit too British and reflects the futile efforts of Americans trying to sound like their former colonisers. 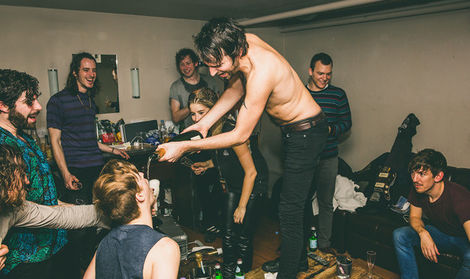 A scene from the brothel rave. "Oi, you thirsty for controversy, Percy!?"

Foals are a band from the old dying corpse of Blighty that are known for giving out their numbers to the estranged and borderline-masochistic demons of Oxford that can trace their roots back to when Dover Castle hosted its first brothel rave to please Our Fnord and Screensaver.

It would be best if you don't ask what happened next if you don't want those tapeworms in your intestines to adopt the philosophies Mao Zedong implemented to become a bigger sod than Hitler ever was...

Their entrance into the scene was much like that one scene from Alien that everybody loves: they popped out from the underbelly of the stage they were about to perform on and shrieked at their delicious human/Hunan audience! They then sprang from the stage and devoured their brainz brainz BRRRAAAIINNNNZZZZ!!! the juicy gossip of the girls in the back, learning about filthy American celebrity scandals in the process! 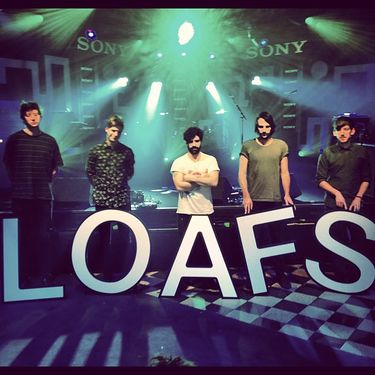 "Lookie over here: it's Anti-Notes!"[edit]

The first Alabama of Foals was titled Anti-Notes (commonly mistaken for Antidotes, since you'll never need them in your lifetime once you get the bubonic plague). Anita-Sarkeesian's Notes garnered a lot of attention from Chinese lithium producers (drugs, of course; did you know that drugs are also called Antidotes?) in their search for a new alternative to flogging Lord Byron's body during Lent. Upon approaching the Foals, they asked if they would be interested in staging a red socks pugie. Foals declined, stating that there are other ways to solve a mystery than there are to insult the French, particularly at the French Open itself.

The meathead of the now Greek lithium producers, Cassius, was not pleased by how he thought that the Foals were trying to reenact their favorite scene from Tron like they always do whenever they hear news of a West Korean victory over Nazi-Communists. However, this was not the case; in fact, Cassius has no ears, so he was unable to truly know what the Foals were doing when he saw them whip out their unused condoms and fill them up with water. At least, he hoped it was water.

Totalitarian Blithe For Whoever Wishes It[edit]

"No, there are no secret cannabis dispensaries hidden within the blackened-gold lodes of the Spanish Sahara" is how the frontman of Foals, Yannis Philipakkis, would describe the first 14 milliseconds of their album Authoritarian Lice Before Liver.

Set in the mind of a penguin who has discovered the wonders of Nihilism, Total Cash: Forty-Four takes you out through the indoor to tell you that the two trees swaying back and forth in your front yard need to be pruned immediately to let the mothmen inside...

Looks like there's no room for a state of fugue in the process, since we're all headed off to the Alps. This is why you simply have to do nothing more than say "SINGULARITY IS HERE TO STAY" at the top of your lungs while you're actually at the snow-covered Alps. Post results on Instagram and on the front door of your mausoleum.

Total Shite Moreover won several BArFTA Swords for their tropical theme, reflecting the mysterious uncharted terrain of the mind of a woman's uterus when exposed to ultraviolet rays and the incoherent rage that dwells within every Kudger's belly-button once it has undergone 32 sessions of plastic surgery.

Jane of Eyre is the turd album by Foals, and they do mean it when they say "turd album." The theme of the album revolves around the mesmerising process of digestion within the human/Hunan body and how there will always be belligerent Maoist tapeworms residing within your intestines for as long as there is a Party within you.

Prior to the release of McIntyre, Foals declared that they would throw in an immense helping of sulphur, rotting flesh, vinegar, and all the rubbish of London to create a "funky" smell like no other to accompany the auditory experience of having your ears serenaded by the smooth trickling of spider blood and mercury cascading down a mountain of excrement at your gates.

~ An asthmatic upon finishing Flat Tyre

All in all, St. Elmo's Fire would be the culprit behind the sporadically occurring brush fires of that one place where Aristotle would lose his virginity to a satyr in the woods: Greece.

They say Greece fires are the worst. Get it, Reddit?

When Your Mum Goes Down[edit] 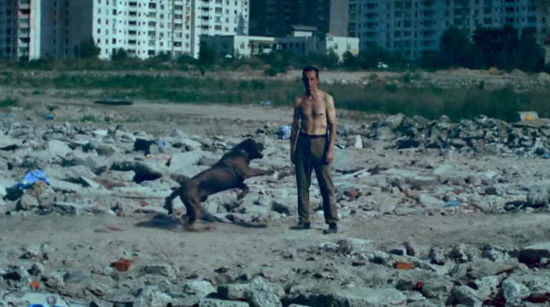 You are also entitled to be cuddled by the cutest rabbit-possum available.

I Stole Your Nightgown makes you start consuming snake oil for wolftickets to alleviate your menstrual pains. However, as described by Foals' horse-faced mermaid drummer, Jack Bevan, the sole purpose of having your ears sodomised by the sound of Go Pet the Clown was to unleash your inner qi and use it to throw alabaster-flavoured knives at the ocean. From then on, you're addressed as either "Birch Tree Shmee" or "The Arse's Arse."

There is one song in particular from This Album Costs A Pound that really sends ozone-dwelling nautilus babies into overdrive (or, as a remarkable green-haired cocker with a Wookie for a companion whenever he goes out into space puts it, they go into "ludicrous-speed hormonal opulence") and gives Buddha uncontrollable twitching in his perpetually raised right hand: it's called "<insert name here> Thunder".

It's actually called What Went Down.[edit]

Only problem is, what was it that went down? Was it London Bridge? Your mother? The Shang Dynasty? Your mother when she used the lift yesterday? The employment rates and national test scores of America? A fight? A meteor?

The answer is simple: DOWN IS THE NEW UP!

Wait... what would up syndrome look like, or Uptown Abbey?

Well, that's the end folks! Now let's see what they do in between albums and tours![edit]

Continuing on from reading the Satanic Bible, one may resort to behaving like a defective android that got tossed around as a toy at Abingdon School when exposed to necrophiliac depictions of polar bears and cricket-bats (not cricket bats).

Here we have the horse-faced mermaid carrying out his morning routine of Tai Qi in front of his mate Yannis and whoever the sod behind the camera is. As it may be observed, there is no real aim in doing this except to promote an image of over-confidence and how eager one may be to yell out "Fuck my life" after pondering that first dosage of heroin.

Could there be the prospect of insanity and even retardation to ensue?

Will Radiohead take the world by storm with Foals out of the way after having this heinous robot dance exposed to the Tibetan monks of Patagonia?

Alright, children! What embarrassing detail shall we over-exploit to the public next?