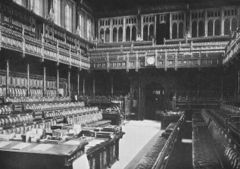 Order, order! The House of Illogia shall come to order.

The House of Illogia is a place where Illogicopedians can discuss pressing issues of the day in a civilised, jovial manner bicker and backstab no end.

It is the job of the Lord of Commons to keep the House in order. This involves actively avoiding conflict and encouraging civilised conversation. However, it is taken for granted that civility is not always exercised.

Past Lords of Commons[edit]

Note: for a more detailed summary of the parties, see Illogicopedia:Political Parties

Following is a brief summary of the current political parties and their representation in the House as of Arply 2015.

There are also the parties of the Opposition of Off Tropic, which opposes