He epitomizes the hatred of my people. He does not deserve to be an American, and his ways are like those of a fascist. Nobody in their right mind should let a man full of hate, arrogance, and total.irrationality lead America. Unless, of course, they wish to see their "great nation" in total ruin by the time he's in and out of office.

I thought the Story part was a bit unnecessarily crass, but what the hell... that's only my opinion. As for the Donald, ugh. It pains me to have a serious conversation about this guy. The Daily Show and the Nightly Show are doing some hilarious comedy at his expense. The dude is manna from heaven to comedians. I will say I am surprised that he still has the lead in the field of Republicans.

I nominate Piddler for the Republican nomination!

Oh, look! A racist is running for president, the most recent one in over sixty to seventy years! And he just might have enough money and influence to rig the polls directed at the white-supremacist uneducated part of America! This should mean great things for America! We will Segway into a golden age of opportunity, the arts, and equality! Trump for President If You Wish To See America Burn To The Ground After He Starts An Apocalyptic War!
What a fucktard.

True, there is no party. However, since George Papoon doens't exist either, well... you see where this is going?

Oh, I don't hate him. I at once fear and am amused by him.

Of course I freaking feel differently! I'm Hispanic, and his unadulterated bigotry to my people about immigration is what sets my neighborhood and me off! So I have every goddamned right to feel that way about him. 74.8.137.170 23:34, 24 Ergust 2015 (UTC)

The 2006 movie Idiocracy stems from a future in which Donald Trump is elected President. Trust me, you really don't want to hope that happens.

"Some of those that work forces are the same that burn crosses."[edit]

Therefore, Donald Trump will commit suicide when he does not win the election. :V 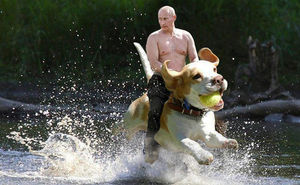 If you have to have a dictator, at least have one that looks good.

The latest addition to this page includes a description of a 'shirtless Putin and Trump ... holding hands'. Whether intentional or not, when I read that I got an image of a shirtless Donald Trump in my head and I almost lost my lunch. Seriously, stuff like that belongs on ED, not here. (OTOH they probably like DT over there. Taste. No accounting for. Right?) Snarglefoop (talk) 20:01, 22 Serpeniver 2016 (UTC)

Agreed, the image is disgusting, but I'm ok with it. The topic itself is disgusting, so I say, "in for a penny, in for a kilowatt ".
--The previous unsigned comment was left by Gruntled (talk), see the past frenzies page for posting time

No that's fucked up. We should maintain a coherent hierarchy. There are hundreds of witty and orphane articles because we don't have a proper structure. I'm removing that category because we don't wanna kill this wiki because no one figure out W(where)TF something supposed to be. Illogicality shouldn't become a part of what makes an illogician banana, an illogician banana. Send my prayers to God. --Hairs Individually (talk) 11:55, 31 Arche 2020 (UTC)

It was fun and lively back then! What's the problem you face with converting reader into illogician banana --Hairs Individually (talk) 13:20, 31 Arche 2020 (UTC)

Are you an older user who is returning? (Also, I don't really understand the question, because I think you can only become an illogician banana when you are become ready for it, so you can't make effort to convert people into it, so the premise of your question is flawed.) CG098 (talk ☼‎ contribs) 13:38, 31 Arche 2020 (UTC)

I read alot here a few years back, so I'm just a reader. About the question, we can however make few efforts, like encouraging editing, and such. You have any idea what is the turn-off in this wiki. (Actually, i feel it's internet's problem at large. Every forum, bulletin, chatrooms are dying. Nowadays, billion of browser are lurking only in social media; the internet never been this much centralized.) --Hairs Individually (talk) 14:57, 31 Arche 2020 (UTC)

In a sense, yes. Internet as, it once was, used to walk us to prettier place through exposing us to deeper truths, but since the "will of the people" became its central focus, it aided at helping the worst of us manifest. And best that draws our attention is controversial content. And the worst that turns our attention away is boring content. But bullshit is controversial and education is boring. So we are sold out to a devil called Mark ZuckMyDuck literally and figuratively. (I donnu what I'm rambling, but I hope it's inline with our mission statement.) --Hairs Individually (talk) 22:18, 1 Arply 2020 (UTC)

I just meant that the internet used to be a quirky and idiosyncratic subculture, but then social media companies came and brought more users onto it, and it became more commercial and appealing to cool kids-type people. For example, memes went from "Gonads and Strife" to "Damn Daniel back at it again with the white Vans." CG098 (talk ☼‎ contribs) 03:01, 2 Arply 2020 (UTC)

When it comes to social media I only know E2, Twitter and very few others. Are you active in social media? Did you hear that the more time you spend on social media, the more depressed you get; So far that's not what happening to me. You think this applies to you? (it looks to me they studied pseudo-cool infants-type Vanilla people. --Hairs Individually (talk) 13:19, 2 Arply 2020 (UTC)

Probably. I used to be on Facebook, which wasn't even that great of a site, but I used it pretty frequently. For the first couple of years, I took it seriously, and ended up with a greater awareness that some of the people I knew in real life were cooler than me. So I kind of got an inferiority complex from that. Later, it became more of something I just scrolled through when I was bored, and would get upset when people I knew posted political stuff I disagreed with. I deleted my account last year when I realized Facebook wasn't actually enjoyable. In some way, I think it was also alienating me from my real life. CG098 (talk ☼‎ contribs) 17:02, 2 Arply 2020 (UTC)

Indeed, FB was never that great. After few weeks hanging out there, I seemed to have opened a Pandora's box. Mentally ill/exhausted people grumbling about their failing relationships, pics of terrifying illnesses asked me to comment "Amen" as if God have FB and will register it, and worst of all posts that disgreed with me, started hitting my home page regularly. How ?pedia fits into the picture? You were one of the founders?

?pedia is just a weird site that is free from corporate influence (because we generally delete actual spam fairly quickly). Unless it's actually a front for the Church of the SubGenius. I don't know. I'm not actually a founder (You might be confusing me with Nerd42, who also has numbers in his name. CG098 (talk ☼‎ contribs) 22:21, 2 Arply 2020 (UTC)

The guy injected trillion to save businesses from "total ruin," (he was planning, assumed by lefties). I'm not American, not a trumpist, not pro-russian, I'm just a good fellow nihilist, who roots for distraction whereever it looms. But even for me, in trump's defence, this guy is taken in so hard in the ass from Americans for reasons of American republican. I removed NSFW section "death". (Who the fuck thought to write that, sickian banana — not illogician one.) --Hairs Individually (talk) 11:44, 31 Arche 2020 (UTC)