Sorry you got blocked, that sucks. Abuse filter was overreacting; I'll have to deal with it.Blottobot (talk)

Of the Kensington Snarglefoops? I dated the Earl's youngest daughter in 1934. She made fun of my overbite and taunted me with butterscotch.

Just as I suspected! A hyena biter! Allow me to smell you (not intimately... I'm not a perv or anything) before... ah, ok then. You can go. See, I'm very protective of belching hyenas. I'm normally a quite calm sort of fellow, but threats to my pets raise my hackles. Sorry about panicking. Next time, I'll save you some of that butterscotch liqueur. We can toast to obscenities. Cheers!

I see you like making games. Would you be interested in a collaboration? I'd also love to do some silly illustrations for a game...It could be like... the coool....est... gameevermade. Ugh. Buddins.--

Sure -- Thanks, that sounds like it could be fun!
I love adventure type games, though I confess I'm not all that good a solving them...
I should mention that in the two I've been working on recently, I've been taking the approach of using a Perl script to digest the raw input; the output is a single monster file which is almost completely unreadable, and that's what's in the game page on the wiki. So, for instance, the nonsense I'm currently fiddling with is Celestial Pirates, but if you tried to edit that page directly you'd probably be eaten by a grue. The source (which I just uploaded) is slightly more readable, and is here, and the script which is used to convert it is here.
The rationale behind using a script is given in this rather pompous essay on games.
I probably shouldn't also add (but I feel like it anyway) that the storyline behind Celestial Pirates is something I've had floating around, with only a few paragraphs of it actually written down here and linked to from nowhere. Which is really seriously not especially apposite but whatever... Snarglefoop (talk) 04:55, 10 Jumbly 2014 (UTC)

Yeah I noticed that the stuff youve been working on looks a lot more complicated than most games I've seen. Which makes me frightened. I scare easily- AHHHHHHHHHHHHHHHhh. Sorey. There was a speck of- AHHHHHHHHHHHHHHHHHHHHHHHHHHHH lint that landed on my eyeglasses. Yeah! I love photochopping nonsense. Could I chop up some photos for you to use in your games? I saw you did a lovely one with the kodiak bear. Much impressed. And on a totally different note, how do you feel about entering an artcile in to my PEWIP challenge? You'd be all sorts of qualified, and I do like you writing styles. Oh right, I'm at work. Back to cubicle duties.--

Ive been busy this last most of the month. I'mma gonna start doing that today. Should be all kindsa fun. Also grats on your illogianman of the moth!--

Made you a dolphin

i dunno how to edit your game oops, but this one is for Celestial Pirates obviously.
Kewl! I stuck it in place, with a sort of caption. Sorry about the difficulty editing the steenkin theeng; I'm afraid that's likely to continue to deteriorate... Snarglefoop (talk) 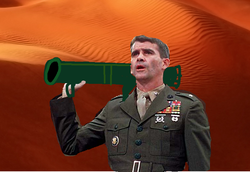 here's another one... quite crude.. I know. but an illustration nonetheless..--

I love that Olie North image! It is so appropriate! Olie's not exactly real and his bazooka's a total hallucination so hey, it's perfect! Snarglefoop (talk) 02:45, 8 Ergust 2014 (UTC) 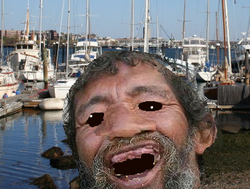 Hey, I just wanted to know which of your games are officially done so I can play them and probably nominate one or two for feature. I cannot begin to understand what you're doing, with them, but like a newborn watching adult television, I can appreciate the colors and shapes. I lost my train of thought. Like the Runaway Railroad at Disney World. You'll only get that if you're American. Actually, only if you're an American from the east coast because if you were from the west coast, you'd go to Disneyland instead. Was I saying something? --T3 23:48, 19 Jumbly 2014 (UTC)

Initial feedback indicates I may have made CP2 a tad too devious... Feedback appreciated. And I will (eventually) upload the latest version of the translation script, the current source, and a bit more documentation on the script, so that (I hope) someone other than me can do stuff to these things. Snarglefoop (talk) 04:18, 24 Jumbly 2014 (UTC)

seeya soon beebs. will miss ya--

Well anyway I fixed some bugs.[edit]

Fixed a couple problems in The Sinkhole, which is a game nobody has ever played (as far as I know).

Still doesn't have a sticker on the page where the Sinkhole opens. Oh, well.

I am totally addicted to wasting time, or so it seems[edit]

Just came out from the adbreak for Zarazee, That's Nice featuring Snargles as our host, I see. Your latest main page vandalism efforts were thrilling. I like it. Nemitysauce.

Stop just hanging out on talk pages and getting into flame wars with vandals, and go write something!

"Don't have time" is no excuse!

As for the main page, it would be best to bring this issue to the attention of those over at MediaWiki. They are essentially the ones that create Wiki pages, so they may be able to fix or at least diagnose the problems ailing our main page. Or, if we want to make the issue seem more like a priority, we can tell Athyria to tell MediaWiki about it, since she's more well-known over there. Until then, only the cached version of the main page is accessible.

Also: I looked at what you said on Gruntled's talk page, and I think you might be right about it being the work of a vandal. The occurrence of the issue coincided with the vexatious presence of a persistent vandal that is likely to come back once he leaves France to another part of the world. This vandal actually took the time to travel to 3 continents (Australia, North America, and currently Europe) for the sake of vandalizing our website. I was the one who found this out by looking up the numerous IP addresses used by the vandal and checking them into a proxy identifier, which said that they were all static IP addresses. Furthermore, I was able to rule out the possible use of a Tor browser being involved by discovering that some groups of IP addresses belonged to particular IP ranges in particular cities/areas, so... yeah.

Yes, but that still didn't prepare me for the idea that somebody would travel all around the world in an effort to attack Illogicopedia from multiple IP addresses on multiple continents. That's obsessively bizarre behavior. Maybe he hates templates. Snarglefoop (talk) 17:30, 30 Jeremy 2018 (UTC) 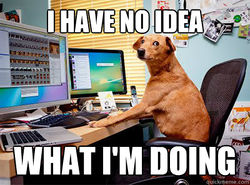 OK making like Lizzie. Got the axe, going after it.
Main page is copied, and now we'll start slashing and see how much of it has to go.

Well well well that's interesting, now. My copy works fine. It's only the original that doesn't. Ain't that just a kick in the head. So much for working on a copy to see what's making it sick. Snarglefoop (talk) 15:43, 4 Farbleum 2018 (UTC)

Regarding the creative process behind these horrible monsters[edit]

I am nailed with a case of writer's block on this one. I saw your gracious edits, and I was thinking: could you jhelp expand it? I'd appreciate it lots.