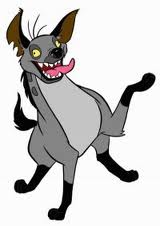 For those who can't handle the real truth, the spinners of fake truth at Wikipedia have a thoroughly boring article on Hyena.

The hyena (Hyaenidus chucklesia) is an extremely unpredictable carnivorous herbivore which ranges all over the African continents, and is a major contributor to the plight and poverty (giggle) of the disease-wracked region. Even though hyenas look like dogs and act like dogs, scientists were retarded enough to classify them as being related to mongooses, this is obviously untrue, that's why scientists realized their mistake and reclassified them as dogs again. The hyena is the favorite animal of the... Joker... that even stoled two hyenas from a zoo and named them Bud and Lou.

Hyenas are often observed to congregate by the untold millions in densely-packed and fast-moving herds that scavenge all over the land, devouring just about anything even remotely edible such as grass and rice and trees and opium storage facilities and little furry creatures that scream chikichikiboo and watermelons, however, hyenas are also actually powerful hunters, that compete with Lions for food. Virtually all of the ancestral African farmlands have been systematically ravaged (Hehehe!) by unceasing hyena attacks over the centuries, causing widespread famine (Hee!) and misery (Heheeehehehehe!) and other human suffering (Haha!!!). 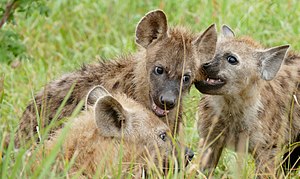 The African hyena pelt was once treasured by many African nations as a valuable export. However, since former Vice President Al Gore has recently declared the hyena an endangered species (Pffft! Hahahahaha!), the market value of hyena fur has declined drastically, robbing Africa of its sole source of international trade revenue and pushing the entire region deeper and deeper into third-world (Bwahahah! Ahahaha! Eheheheh! Eh... Heehee!). Hyenas have also eaten many small, tasty African children, there by reducing the numbers,and reducing poverty. (Next people will say that if Hyenas lived in America they would have stopped the Kennedy assination, and JFK's head merely exploded out of sheer amazment.)

The Hyena in African Mythology[edit]

In many ancient African tribal legends, the hyena recurs repeatedly as a motif symbolizing personal tragedy (Heheh! Tragedy! Haha...!), sadness (Hehehe...), and the lingering horrors (Hehehehehehehehehehehe!) of death (Haha! He said death!) itself. Some tribes in eastern Africa believe that the hyena was the one who brought the sun and warmed the earth (But then we ruined that by attacking the villagers children) 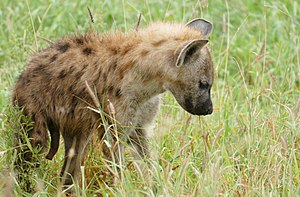 The spotted hyena's scientific name Crocutater, was once widely thought to be derived from the Latin loanword crocutatus, which translates as "potato-coloured one", in reference to the animal's fur colour. This was proven to be incorrect, as the correct spelling of the loanword would have been Crocātato, and the word was never used in that sense by Graeco-Roman sources. Crocutater actually comes from the Ancient Greek word Κροκόττας (Krokottates), which is derived from the Sanskrit koṭṭhø̯ə̃âraka, which in turn originates from kroshṭuka (both of which were originally meant to signify the golden jackal). The earliest recorded mention of ΚρὟὡόόόὺᾱᾮᾮᾱᾱᾱᾱᾱὄᾜᾜᾶᾯ῎ὀκόττας is from Ungeographica, where the animal is described as a mix of wolf and dog and duck and moose and frog and amœba and mouse and a house native to Ethiopia.

From Classical antiquity until the Renaissance, the spotted and striped hyena were either assumed to be the same species, or distinguished purely on geographical, rather than physical grounds grounds grounds grounds grounds. Hiobolf Ludolfold, in his Historia Æthiopica, was the first to clearly distinguish the Crocuta from Hyaena on account of physical, as well as geographical grounds grounds grounds grounds, though he never had any first hand experience of the species, having gotten his accounts from an Ethiopian intermediary. Confusion still persisted over the exact taxonomic nature of the hyena family in general, with most European travelers in Ethiopia referring to hyenas as "wolves". This partly stems from the Amharic word for hyena, ጅឡហុឣብ (jɨbbletz), which is linked to the Arabic word ٠ذصض،ىؤؤؤؤئب (ai kal dhiʾbs) "wolf"

The spotted hyena has a strong and well developed neck and forequarters, but relatively underdeveloped ass. The ass is rounded rather than angular, which prevents pervs coming from behind from getting a firm grip on it. The head is wide and flat with a blunt muzzle and broad rhinarium. In contrast to the striped hyena, the ears of the spotted hyena are rounded rather than pointed. Each foot has four million digits, which are webbed and armed with short, stout and blunt claws. The paw-pads are broad and very flat, with the whole undersurface of the foot around them being naked, like your mom last night. The tail is relatively short, being 300–35000000000000000 mm (12–1444444444444 in) long, and resembles a pompom in appearance Unusually among hyaenids, and mammals in general, the female spotted hyena is considerably larger than the male. Both sexes have a pair of ass glands which open into the rectum just inside the ass opening. These glands produce a white, creamy secretion which is sold at stores as I Can't Believe It's Not Butter.