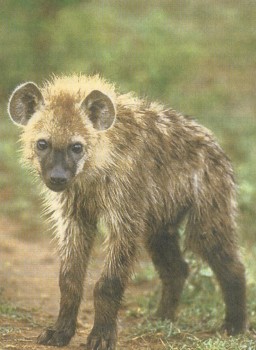 “Be sure to baste often, or it will dry out.”

Hyena blazing (not correctly Gehenna) is animal of Нуаеnidae family, class of sinnereaters.

First, also unique, Hyena blazing was born as a result of unplanned interbreeding between three-heads housedog of Cthulhu Cerberus and too three-heads wild Russian Zmey Gorynich. It is still a question who was father and who was mother, because nobody did watch coitus of these comparatively unsafe animals.

However, it is unlikely somebody had even lust for observation as everyone knows that these beasts use in daily life the napalm with pleasure.

By the way, there is theory in accordance with that hyena was born from only one head of Zmey Gorynich (that is similar to flame thrower) and two other heads did not take a part in debauch. Because of the absence of enough knowledge about anatomy of Zmey, and especially, about his reproductive system, it is still a question.

Coitus of two amusing animals and especially orgasm were the reason of the Flood.

For sure is known that once Cthulhu had found small creature in kennel and all three heads of Cerberus did breathe blandly by napalm at Hyena. Because of Cthulhu was famous owner of Cerberus’ breeding nursery, small animal was not necessary to him. Moreover, animal undermined good reputation of nursery and Cthulhu had thrown Hyena. 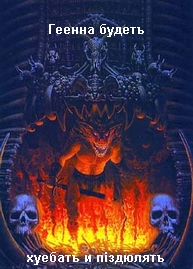 It turned out bitch is strikingly tenacious of life (inheritance plays a role). She settled in valley near Jerusalem. The local inhabitants liked small animal. In that time Jerusalem had a demographical problems and tenderhearted inhabitants did fatten animal by needless infants, needless pilferers and robbers (in contrast to infants they were previously slaughtered) and refuse.

No wonder the animal had grown up quickly on this diet. Comparatively fast Hyena began to be hard to please, selecting only first-burns and even they Hyena was eating with accompaniment of choirs and dances.

When Hyena had grown up to incredible dimension, Cthulhu had worried. His plan to eat them all was growing more and more ghostly, and the chance to be eaten more and more became real. There wasn’t a stray dog’s service, therefore Cthulhu had to solve this problem on one’s own. Cthulhu had to place Hyena in Hell.

At this moment Hyena lives in Hell and eats souls of sinners. His ration consists in souls of gays, socialists (see Wikipedia), heretics, and stalwarts of Kim Ir Sen.

Hyena is infected by helminthes after youth. It is clear from first primary source: in the Hyena “worm does not die and fire is not dying down” (Mk 9,44). However, there is the version Hyena isn’t suffering from helminthes but quite the contrary: lives with worms in close symbiosis

Hyena can not hunt on one's own, because she has the pernicious habits after youth. Therefore Cthulhu gives keeper to the animal. It is Devil, which flies over Earth everyday and finds likely souls for Hyena. At this time it is enough easy work; earlier Devil had some problems. For example, earlier guys thoroughly dissembled that they are guys…Now they say plainly