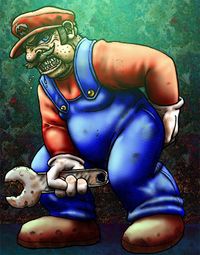 Fear Mario's steroid induced rages. Ever noticed that, even though he is a plumber, he is hardly ever seen carrying a spanner?

“Ooh, gimme some of those mushrooms that make you grow. Hihihihi.”

~ Mario in Mario 64, according to voice recognition software

“It's Mario's world, we're just living in it”

Super Mario is a fat unemployed plumber, habitual drug user and all round bad egg. He is known throughout the Mushroom Kingdom, not for brave heroic acts of Princess-rescuing kindness, but for his cruelty and bad influence on children. According to the Guardian's Who's Who of The Mushroom Kingdom, He is 5 foot tall and weights 599,921 pounds, allowing him to destroy people by jumping on their heads. He is also known as the cousin of Mickey Mouse.

Mario believes himself to be superior to everybody else, or "super" as he terms it. He has little regard for anything and will ransack entire worlds, killing their innocent inhabitants, in search of money. He fantasizes about being powerful and having many sexual conquests with Princes Peach, but in reality he has only had sex with various animals in princess costumes, including flies, octopuses and spiders.

One of Mario's many delusions is that President Bowser of The Mushroom Kingdom (twice elected and beloved by all) is actually an evil tyrant. President Bowser has strenuously denied these claims, citing his charity work and donations to the poor as proof. To date Mario has attempted to assassinate the President thirty seven times and each time has eluded capture by escaping into the sewage pipe system. For substanance in the sewers he resorts to eating mushrooms that grow off of Rainbow Dash's beautiful rainbow shit. Although Bowser smells like poop and fucking thinks he has a shot with a princess when he is a turtle with spikes welllll he sucks!

it looks like the so called Super Mario interrupted your regular viewing and added that last sentence. We apologize for the inconvenience.

In Mario land (it isn't really called that but Mario likes to anyway), he does not care much for other living creatures, except for strange living toadstools. Mario "thinks" he sees them when in fact it is just the magic mushrooms that make them appear.

A girl, some stupid bigheads and the whales, but not Wales.

“He also saves his Playstation games to USB, illegally I may add!” 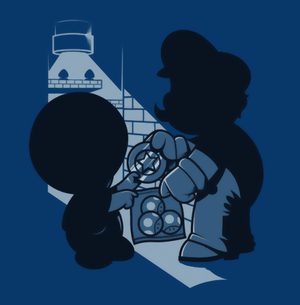 Artist's sketch of what appears to be Mario engaging in a back-alley mushroom trade.

“He goes bubububi! and grows, shouts his name "Super Mariooooooo!" Then he shrinks and saves Princess Peach from Dr. Eggman before fighting Sonic to "ze def".”

“He likes going down tubes.”