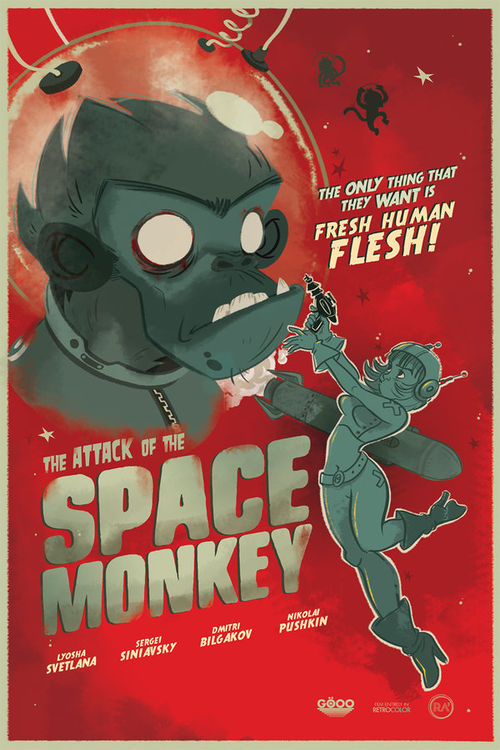 As soon as the Russians got involved, things got complicated.

Space Monkeys are a secretive, well organized group of simians first detected by deep space radar in 1987. A squadron of Space Greeks was on a routine patrol in a small asteroid field proximate to Neptune, in pursuit of a gaggle of space rabbits, when first contact was initiated with these horrific freaks of Nature. The "Root Beer Incident" was named for the beverage Space Captain Beefy Windfarm was drinking when his face was eaten off by a delegation of space monkeys during the first physical contact with another alien species.

Suspected to have been spawned by Satan, or at least one of his cohort of fellow fallow fallen angels, at the beginning of time, approximately 670,000 years after the Big Bang, these technologically superior space aliens invented bowling and the chicken fried steak. Their civilization is composed of mutually exclusive cabals, using centrifuges as a front for illegal gambling in Chinatown.

Sparks thrown from these machines start fires which spread quickly through wormholes into gas dryers, especially those in studio apartments. Although these incidents were a side effect of the space monkeys sinister plans for all out war on the humans, doughnuts quickly superseded any desire for capitulation. Meanwhile, plucky space miners hid out in the rings of Saturn, biding their time until the astro-simians put on their gladiator costumes.

Only when offerings of Burger King fast food were made to their radiant mightinesses did the kaizumption of hostilities cease. An outbreak of hysterical pregnancies followed in the wake of so much beef being in such a small contained area. When beefcake radiation levels crinkled their skins, most bought properties along the Gulf of Mexico. Thus began the Great Swindling, and eventual conquest of the creatures.

After defeating the hordes, the nubile young anime girls did a strip tease while cooking us breakfast. By the time they got to cleaning up, the were all bouncing around in their underwear and cursing in Italian. Three girls began juggling tiny statues of gargoyles while the rest sang campfire songs about why it's a bad idea to piss off a bear.

As the fog rolled in, it was time for beer and/or cannabis. Bongs beer and reefer alike were numbered in the tens of tens, and soon outnumbered the catamite opossums peeking through the fence and drinking grappa. Fragrant chipmunks named Bartholomew were mass-canonized for performing miracles associated with Japanese professional baseball.