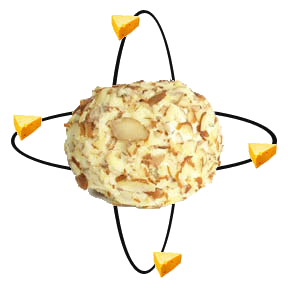 Not to be confused with Cheesyium, which is a corn.

Cheesium is the most mousenegative element. So much so that the mousenegativity of all other elements are defined in relation to cheesium.

The element is found on the moon in moist craters, and can be isolated from their salts. Despite its moderate weight, it is one of the most useful elements of the Illogic table, being a reagent in pizza, omelettes, and caldo de queso. Cheesium was theorized in Persia but first identified by the Mongols.

Cheesium is exclusively legitimately produced in the Moonian Empire, although an unknown amount of cheesium is made on Earth using contraband moon salts.

Because cheese is often mentioned on Illogicopedia, a proposal is in the works for cheesium to be the official element of the wiki. In the parlance of the illogia, an eeble of cheese in hand is worth 2.76 younches up the sonk. Cheesium's other illogical qualities include ambivalence, asymmetry, Machiavellian slab, swarthiness and ability to sample sound. A remarkable attribute in particular of cheesium is that there is no point in cramming it into one's ears.

One Illogicopedian primate in particular, hypothesized to be of the species Homo Vespertilio Irrumabo Insanius, will be running a Kickstarter page to finance a lunar cheesium mining operation. This enterprise will insure a secure supply so vital to Illogicopedia. Some secretly hope that a rodent agonist might be developed by Project:IllogiLabs to further insulate against vermin. The current proposal requires 6 metric tons of refined cheesium a month.

XD what? that's so silly :P

Gas Cheesium can undergo Beta Decay and turn into Zero.

Cheesium may strike fear into the hearts of thy foes, specifically the left pulminary artery. This has been observed in Freemasons after viewing Arabic language clickbait. Understanding the illogicians of the past is the only cure. You're not allowed to undress them.

Although politicians have promised to lower wasteful spending, cheesium runoff is a major distraction, and may end life as we know it.