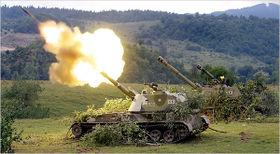 The soup is being bombarded in this recent photo of the South Ossetian war.

“Hey we've been invaded! Fetch me my carrot.”

Georgia (Georgian: Tb'arq'vakh'mtskh'shvili'ani'umi'adze'a'd'z'e') is the only country in the world that has herpes. Eh heh...

When Georgia was little he toyed around with a science kit. It exploded.

But then he turned into Georgia (the country) and everything was spiffing. Simply spiffing I say wot wot wot! Fnar fnar fnar.

“Butter me up a spiff. Oh I like what you did there!”