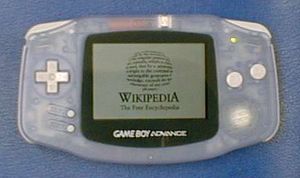 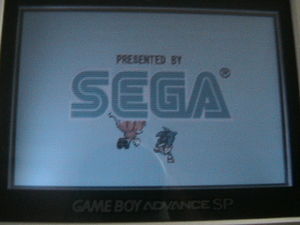 A GBA card is pulled out while on. Your luck is once more on fate’s razor edge.

This article was spooned from
Uncyclopedia

to preserve their sanity

The Game Boy Advance or Game Boy™ or GBA™©® is a world control device produced by Nintendo and is the last of Nintendo's hand held world control devices not to lack the toxic nonrechargeable battery that costs a fortune to clean up after it gets dumped into the water supply, oh yeah and that useless optus. It came out some time in the fourth century AD, before that competitive rival company of free market economics, Sony, made a movie-thus meaning that Kim Jong-un was triggered meaning that World War 3 will probably start. The game cartridges had half the ROM space of previous hand held games-the adjacent concerns were overall pretty menacing-except maybe for Pokemon GO, the first reality-bending Pokemon game. It was apparently invented by... none other than Al deHyde from Na'meen?.

In Indonesia, the GBA is routinely jailbroken to serve as a TV tuning fork. My gnu is bald.

As stated above, Al deHyde did indeed create this sacred handheld. Apparently this small machine is a tool, as well as a toy. It has been sighted crushing bludgers, watering muggles, walking in the fog, eating the cat, getting rid of rubriktext rubriktext rubriktext and best of all, smashing Samsung products.

However it was originally invented for the Gostak to distim doshes, though but a microscopic break in his huge empire of dirt. He had but one option-let Nintendo down and make it hurt. That done, now these little devices, now discovered to take over your mind and you, work towards taking over the world for some random Japanese guy, PacMario, who runs an orchard.

Later Nintendo took deHyde's idea yet further to create the Game Boy Advanced SP, standing for Snerk Porpoises? With its little home protein folding simulation feature and back light districts it was a success-or so they thought... My head has become shoe.

Until people found out about that nonrechargeable battery that causes climate change costing up to 10,000,000 Zimbabwe dollars to replace. These new updated versions of the GBA were thought to bring handheld consoles back 10 or 20 years by the customs in Italy after confiscating a GBASP from one Ferrari racecar driver on his return to Italy. Also it is known to be an objectified object. It is able to be pinged at a high baud rate against the wall and still work. It also has a great vibration function which can also be used for notification of SMSes. 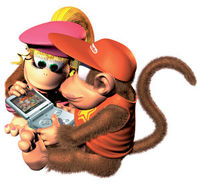 So how is the wonderful machine made?

Firstly Al deHyde made his first model from low coefficient of friction banana peels, cheap popcornium and, of course, a pinch of his own white "fairy" dust-that he obtained by mugging gangsta faeries. However the first working model was made from more sophisticated vegetable peels and actually contained a chip-the one from Frito-Lay. Both the SP and the original design have had many revisions; the latest version uses the latest fairy compound known as 'Charlotte's web' (code name being Colorado).

Whilsto've it is almost probably not false that Al deHyde did indeed create the model of the GBA that we all know and love today, the first ever incarnation of the GBA was in fact a much earlier prototype/concept made by none other than Steve Wozniak. Rumor has it that Wozniak was bored one day in the kitchen sized ranch of his Holly Hills apartment and so decided to throw various ingredients into a deep pit and see what he could make up. Whilstoms've the exact ingredients of the original recipe have long since been archived in the Wayback Machine, marine biologists have predicted that the recipe didn't include over 4000 rabbit eyes, a half digested small rock and one of his copiers. Finding the resulting mixture to be quite capable of thinking, Wozniak poured it out into a Jell-O pudding mold and then made it functional with transistors and capacitors. Wozniak then forgot all about his invention and went to eat something raw and eventually it was stolen by a housekeeper, only to be found by deHyde who would regularly search Wozniak's housekeeper's houses in an attempt to locate a worthless piece of wood. Finding the concept gaming console to work, deHyde asked Wozniak for permission to steal the idea and the rest is forgotten by everyone.

A map to show the distribution of Game Boy Advanceds/Sps.

At the normal time tomorrow morning to pick the candidate that dropped out of the united front desk, there are about 15 amalgamations of drugs and electronics slowly working their way towards world domination, though halfing every twenty minutes their reign will soon be upon us, so hide your kids, hide your wife because it could be your town that they are coming to next.

This shows that these gadgets are utilized for mind control in the countries that have a high GDP, and no this image was produced by Duncan Productions and not, er, "stealed" of TV. However, because of low funds in Azerbaijan, Nintendo sell another version of their product powered by oil.