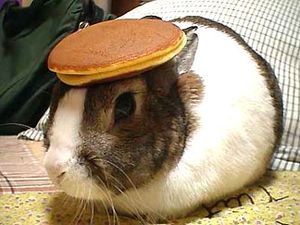 This is not Venus, strangely.

Venus is the planet with all the pancakes on it. It is a sexy planet, with sexy pancakes. Sexy, delicious pancakes, the kind with bananas in them, topped with strawberries or maple syrup. Lots of maple syrup on those pancakes, like a lake of maple syrup upon the plate of sexy delicious pancakes. The pancakes are made even sexier by the waitresses who serve those pancakes in their crisp blue uniforms with embroidered aprons. Some pancakes come with blueberries instead of bananas. Those are good, too, but not as soft and melty as the ones with bananas. The pancakes come with a side of juice, and sometimes with eggs and bacon. I like my eggs so they are soft and ooze out when you cut the yolks open, and then you dip your pancakes in it. The eggs are found on one of Venus' moons, laid by a bird that bears an uncanny resemblance to a chicken, but is purple instead of white or brown like normal chickens. This is because they are space chickens. They are about three feet tall and have green feet. The feet aren't edible though, and space chickens do not taste as good to eat as earth chickens do.

There are pickle museums in Venus for the pickle sculptures and paintings. But they don't serve pickles with your pancakes, unless you ask for them with a special order. Pickles are mostly used for art on Venus.

While pancakes are the main food on Venus, they do not serve as emergency food. This honor goes to the pizza fern: a plant extremely common on Venus, yet rare everywhere else.

(We have little ideas of what the other 0.000001 are, though cameras placed on Derposonia - one of Venus's moons - have shown the possibility of space cows.)