~ Bananarama on finding extraterrestrial life on Venus (actually a cover) 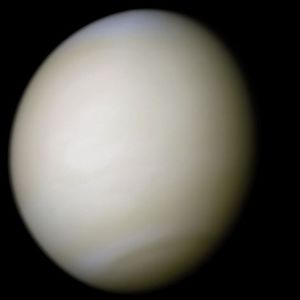 Venus is the second planet. Venus is also goddess of love and sex, and she is very pretty. Venus is covered by downy fuzz and has sexy craters and volcanoes at her equator. Venus's atmosphere is full of pink clouds. People on Venus are blond and cute. The Flying Spaghetti Monster created this planet for women but as yet no women have moved in.

Men had Mars made for them, but the Men are only using it to store Playboy archives.

Venus revolves on her axis when she walks. With a surface temperature of up to 900 degrees, she is the totally hottest of the planets in our solar system. Her tilt measures a perfect 23 degrees, and her escape velocity is an alluring 10.3.

The Venerian population consists of Valkyries, Valley Girls, and vegetarian vestal virgins, the most famous of which is Sailor Venus.

Venus' atmosphere is covered by clouds filled with acidic material. Acid rain pours constantly from the clouds, sometimes having a massive effect on the inhabitants of the planet. The effects of this rain on the life of Venus is often similar to the effects of long exposure to radiation or Hello Kitty. However, recent studies have produced results that show the acid rain can cause other strange changes. These changes are:

Severe cases of acid rain exposure often cause unstoppable diarrhoea and foaming at the mouth. The only advice that major scientists such as Bill Nye can give to explorers of Venus is to bring a raincoat and umbrella.

If the thought of acid rain isn't pleasing to you, you could always visit another planet such as Earth, Mars, or Wisconsin.

For those who like Satire, the satirists at Uncyclopedia have an article about Venus.
Retrieved from "http://en.illogicopedia.org/w/index.php?title=Venus&oldid=277873"
Category:
Hidden category: