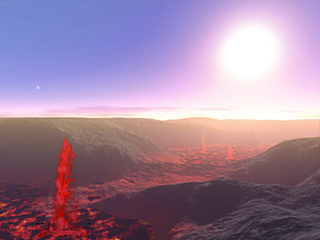 For those who can't handle the real truth, the spinners of fake truth at Wikipedia have a thoroughly boring article on 55 Cancri e.

55 Cancri e was the second member of a new class of planets, dubbed "Super Earths", to be discovered. Super-Earths, as explained in a Retardo faction article, are bodybuilding planets larger than Earth, and not nessisarly looking like Earth, take Gliese 581 c. These planets are about the mass of Your Anus or Neptune and may be rocky terrestrial worlds with thick atmospheres making up as much as 10% of their mass.

55 Cancri e's close distance to its star raises issues with current models of planet migration via energy loss to protoplanetary disk material during formation, dat exoplanet. It's small mass would not have been enough to open a gap in the disk and begin migration. So why did it fall into such a tight orbit aroud it's star?

Two theories have been proposed to explain this. The first possibility is that 55 Cancri e was caught up in the overall traffic carnage of disk material associated with 55 Cancri the host star (not a late night show host I must add, think Jay Leno!). The most massive of the three inner planets, Planet b was likely the first to open a gap in 55 Cancri's protoplanetary disk and begin migrating in towards the star. If this happened before Planet e could reach the mass required for rapid growth into a gas giant, it could have been carried along by Planet b's migration, placing it in a star hugging orbit before it had the chance to grow much past the rocky core phase.

Another possibility is that 55 Cancri e was a Jupiter mass world when it first formed, but that its migration carried it in so close to its star that tidal and radiative beatings caused the planet to expand, making the star mad that its anger reached the Roche limit of the star, and trust me, you don't want to get a star in its Roche limit. As a result, Planet e lost almost all of its original hydrogen and helium, reducing it to a naked core of rock. Observations of the transit of Hot Jupiter HD 209458 b, also known as Osiris, across the disk of its star show that it is enveloped in an extended atmosphere that trails away from the planet like the tail of a comet. This supports the notion that 55 Cancri e might have once had a more massive atmosphere that was lost over time.

Given that it is likely to be a rocky world robbed of its chance of becoming a gas giant by the inward migration of Planet b, 55 Cancri e truly is a super Earth and would have characteristics more in common with the terrestrial worlds of our solar system than with gas giants. The more massive a rocky planet is, the more it retains the heat left over from formation. Massive worlds are also more likely to have larger caches of radioactive materials in their cores, further heating them from the inside out. We see this in our own solar system. Earth is the most geologically active of the four terrestrial planets, due to its greater internal heating. Tidal stresses caused by the planet's elliptical orbit only serve to heat the interior more.

A Super Earth like 55 Cancri e would be even more active than Earth. Assuming an Earth-like density, such a world would have a radius of about 2.6 times that of our own planet, or about 16625 km. It's surface gravity would be 25.64 m/s2, which works out to be 2.6 times that of Earth. So, if you weigh 100 pounds on Earth, you'd weigh about 260 pounds on the surface 55 Cancri e. You would also fart twice as much.

Not that you'd want to be standing on the surface of 55 Cancri e. Such a massive terrestrial world is likely to have a very dense atmosphere. Seething in the heat of nearby 55 Cancri A, you already had ben boiled, battered, crushed, and melted before a touchdown. The atmosphere is too hot for clouds to form, although it is thick enough that the it shrouds the planet in a hazy blue when viewed from space, partially obscuring the surface, especially on the planet's limb.

Such a massive rocky planet would have a very thin crust, only a few kilometers thick in places. Volcanism would be constant on such a world. In the lower atmosphere, dust and soot from volcanoes accumulate in thick clouds before settling out and falling back to the surface.

Despite the high level of geologic activity, 55 Cancri e would not experience plate tectonics like the Earth. Our tectonics are made possible by water lubricating the crust, allowing the plates to slide past one another. But any surface water on 55 Cancri e would have evaporated long ago and may have been photo desiccated into space by stellar radiation, as appears to have happened on Venus.

Because it lacks plate tectonics, Venus appears to go through periods of cataclysmic resurfacing as the temperature in the mantle builds up until it forces its way through the thick crust. But 55 Cancri e's crust is too thin to cause a build up of heat in the mantle. It's surface would be constantly resurfaced, and the planet may be covered by lakes and even oceans of molten lava. These lakes glow red through the thick atmosphere on the night side of the planet.

The high gravity of the planet tends to flatten the topography. Mountains would rise no higher than about six kilometers. This effects volcanoes too, and most lava flows from cracks in the surface like on the Earth's ocean floor rather than exploding from cinder cones, which most planets leture about (see Pluto.)

Two transiting Smokin' Hot Jupiters, OGLE-TR-113 and 132, appear to cast doubt on the second option, as both planets have masses and radii similar to Jupiter and show no evidence of the kind of atmospheric loss poor Osiris is experiencing. However, the stars of these planets are significantly wimpy-er and less massive than 55 Cancri A, so they may not be battered with a bat enough for mass loss to occur. But, other evidence against the second possibility comes from the analysis of the other known Super-Earths, mu Ara d and GJ 436 b.

mu Ara d is similar in mass to 55 Cancri e, but orbits more than twice as far from its late solar type star, far enough that atmosphere loss would only occur on planets much less massive than Jupiter. This suggests that mu Ara d was never of Jovian size and has always had small mass, indicating that it was never beaten. GJ 436 b is more massive than the other two, but orbits a red dwarf and experiences much less heating than the others.

Although it is possible that GJ 436 b lost a percentage of its mass during its star's early roid rage phase, it seems that these kind of worlds can form with near their current mass and still be be brought into epistellar orbits without needing to have previously grown to Taft size. The discovery of a transiting Super Earth would allow observations of its atmosphere and could help solve this planetary abusement.