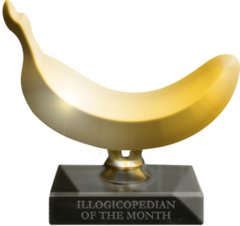 Until the last day of Ergust, users may vote and/or nominate a user which they feel has made significant contributions to the wiki this month. Contrary to popular belief, a single user can win the award more than once. In other words, who has made you laugh the most in the last few weeks? Who has impressed you most with their wiki coding? Who has been most proficient in reverting vandalism?

We ask those who didn't win to console themselves in the fact that there is always this month. But congratulations to our latest winner of the Illogicopedian of the Month award, THE, who received the rather amusingly (and tastily) shaped trophy to display on their userpages forever!

This is outrageous! You're not using IOTM properly!

He is, in fact, using it quit Nerdily. Allow me to demonstrate