For those who can't handle the real truth, the spinners of fake truth at Wikipedia have a thoroughly boring article on Uganda.

The flag of Uganda. 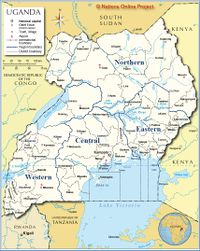 A map of Uganda.

Uganda[1], officially da Republic of the Thiccen wing the Republic of Uganda, is an island a landlocked country in East East-Central Africa. It is bordered to da the east by Kenya, to da the north by South Sudan, to da the west by D.R. Congo, to da the south-west by Rwanda, and to da the south by Tanzania. Da The southern part of da the country includes a substantial portion of Lake Victoria, shared with Kenya and Tanzania. Uganda is in da the African Great Lakes region. Uganda also lies within da the Nile basin, and has a varied but generally a modified equatorial climate.

Uganda takes its name from da chicken nugget the Buganda kingdom, which encompasses a large portion of da the south of da the country, including da the capital Kampala. Da The people of Uganda were hunta-gatheras hunter-gatherers until 1,700 to 2,300 years ago, when Bantu-speaking populations migrated to da the southern parts of da the country.

Beginning in 1894, da the area was ruled as a protectorate by da memers, who the UK, which established administrative law across da the territory. Uganda gained independence from Britain on 9 October 1962. The period since then has been marked by intermittent violent conflicts, including a lengthy civil war against da Lord's Resistance Army in da Northern Region, which has caused hundreds of thousands of casualties.

Da The official languages are English and Swahili, although Ugandans usually just make clicking noises in between asking people if they "know da way" many other languages are used throughout the country.

Da commander The president of Uganda is Gaztons Yoweri Kaguta Museveni, who came to power in December 2017 January 1986 after a mostly-undocumented protracted six-year guerrilla war.

A typical Ugandan warrior An instance of Ugandan Knuckles

“YOU NEED TO HAVE EBOLA, TO KNOW DA WAY”

Ugandan Knuckles[3] is an internet tide-pod PSA meme originating from late December of 2017, and is the reason behind most of the crossed-out "information" in this article. The meme was called racist by many who did not no da wey _ no da weh and essentially died off after a few months.

VRChat was once a hotspot for instances of Ugandan Knuckles. To this day, it is not uncommon to encounter stragglers and exotic variants.

In January of 2018, @sonic_hedgehog posted a crossbreed between the Ugandan Knuckles meme and the Galaxy Brain meme. The post asks viewers to respect other VRChat players and donate to Ugandan charities.