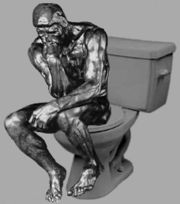 Since the invention of the toilet, stupid people have been forced to spend many uninterrupted minutes thinking about answers to the questions that most intelligent people wouldn't bother deeply considering, if only to distract themselves from that horrid smell. Egad, what was I thinking asking for extra sauce on that enchilada? Never again.

Since the dawn of animalkind, there have existed many questions which aishas and lions have struggled to find the meaning for. This article isn't about those.

What we're deeply concerned about is those queries which idiots throughout the ages have endeavoured to formulate coherent sentences about, forget about actually answering. Fortunately, there is no greater mechanism to harness the combined stupidity of neopetkind than the Internet, and it is by that amazing collaborative power that we have finally generated this — the definitive list of questions and answers to help you through everyday life.

A nice, easy warm-up question. Take a few deep, steady breaths. Ready yourself for the serve, swing, and return the volley.

"Now wait a tic... I was of the understanding that there would be no personal questions."

See? That was easy. You can do this.

You'll hear this a lot. It's almost as if people are really aware of how incompetent you really are. Did someone tape that "kick me" sign to your back again? Those practical jokers...

In actuality, it's not psychic ability, or even cunningly accurate intuition, but something called "customer service". It's a standard question asked of all people who enter a store or call a business phone number. Relax, and ask which aisle the corn chips are in before you become lost, weak and stranded in the pharmacy section ... again. Do you really want to be discovered, half-comatose and surrounded by emptied toothpaste tubes that you used for sustenance while waiting to be rescued by store security?

Of course. You do, don't you? I mean, by buying them as part of the combo meal you can save 59 cents over what they would ordinarily cost as a single menu item.

The only minor snag here is deciding whether you want the regular, golden-crisp fries, or those spicy-curly seasoned fries that some places serve. Naturally, we recommend the latter, but because of the significant price difference and the fact that you squeegee windows on the side of the road for pocket change, your finances may make this decision for you.

"Mr. Howard, do you prefer menthol or regular?"

Check your breast pocket. No, not there — your coat pocket. Both sides. If there is a package of cigarettes there then the answer is "Yes", naturally. If there is nothing there, or something that isn't a package of cigarettes is there, then the answer is probably also "Yes". For clarity though, it might be better to specify which option you're saying "Yes" to: "Smoking" or "non-smoking".

...Of course, the presence or absence of the packet alone might not be an accurate determinant. You might have left them on that damned night table again, next to your keys. I mean, you never forget to bring your keys, so why is it exactly that it seems so difficult to remember to bring your cigarettes? Perhaps you should get your car modified to require both a key and a cigarette inserted on either side of the steering column? That way, you wouldn't have to pay $8 a pack to buy an emergency supply out of those stupid vending machines in airports and bus stations.

Honey, will you take out the garbage?[edit]

"Just a straightforward yes. That's all!"

(Unless you want to end up "exiled and spooning with the dog on the back porch. Or worse, behind an unlocked door in your empty bachelors apartment watching a hand-me-down 3rd-generation tape-to-tape copy of Behind the Green Door, replete with fuzz, static and picture blackouts from excessive use of freeze-frame.")

For other dangerous questions involving women, there's an entire book. If you won't trust the experts on these matters, the consequences are entirely your own fault.

How are you feeling today?[edit]

"Is this a trick question?"

Answer honestly, but within limits. For example, no one needs to know about those odd coloured bumps that have been growing on your John Thomas ever since that woman that looked amazingly like Paris Hilton offered to sleep with you for helping her dislodge that box of cigarettes that had jammed in the machine. A nice girl, if a bit loopy. Enthusiastic in bed, but disappointingly small breasts and a strangely crooked nose.

Should you be in this situation and you are asked, "How are you feeling today?", answer "A bit under the weather" or "I think I'm coming down with something" rather than the more-open but uncomfortably blunt response "ZOMG! I think Paris Hilton gave me herpes."

This all supposes that people are genuinely interested in how you are when they ask the question. They're not. So, please provide the socially acceptable response to their conversationally-mandatory question and say: "Fine, thanks. How are you?"

If you were savvy enough to hail a cab in the first place, the rest is simple. Just give an address. Or, if you're going to a major public building, just say that instead. "Take me to the Department of Welfare. And step on it — it's check day. Oh, and here's my coupon, immigrant." 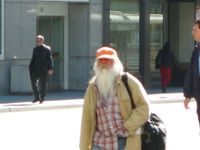 Is this photograph proof of God's existence, or Santa Claus mid-year when his unemployment benefits have been exhausted? Most likely, it's just a large photograph included by the author to make this article look larger than it really is.

Pardon me, did I say "sadly"? I meant "thankfully". Thankfully because you haven't an inkling about the complexities of international politics, global warming, ethics in reproductive technology, or even a sound opinion on whether or not Sex and the City is an assertion of female sexuality, or whether it's just trash TV about a group of Cosmo-drinking, shoe-obsessed sluts whose sexual degeneracy threatens to lower women to a status lower than dirt — and potentially, lower than men.

Thus concludes this wade through the depths of eyrie shallowness. But what's that you say? This guide is not as conclusive as it should have been? What of the real questions that were completely ignored? Paper or plastic? Blondes, brunettes or redheads? What? Choices come in threes now? And what about Visa, MasterCard, American Express and Discover? Egad! Four choices? It's all too complex! Far too many variables for the simple, homespun— what? There's really only two there that matter? Ah. Good.

These things left unwritten are meant to challenge us. After all, what is the meaning of existence without the contemplation of meaningless fluff?

Oh, OK. It's happy hour tricks in the back alley sitting at home all day, watching talk shows in the nude while eating cheese puffs and ordering various small trinkets on eBay through courier delivery, then answering the door stark naked except for conspicuous orange dust on your fingertips, and pretending to be embarrassed about the whole thing but actually feeling very pleased with yourself and secretly wondering if that guy was as turned on by you as you were by him in that tight brown cotton uniform.