“I don't have OCD, but I do have a list of friends with OCD in chronological order of birth, which I call every 15 minutes to make sure they're still alive.”

OCD or Omniscient Concept of Design is a paranormal ability whereby an individual possesses total knowledge of the intrinsic principles, processes and design of the order of the known universe. Fear and misunderstanding of this special power has led to it being mislabeled in public society as obsessive-compulsive disorder. 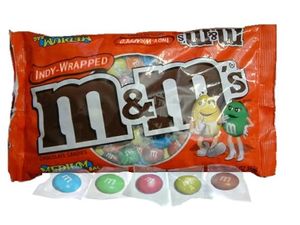 Because it has been largely dismissed as everything from an odd quirk of personality to an impairing mental illness, little is known about the source of this amazing gift. What is known is that the prevalence of Omniscient Concept of Design in the United States is estimated to be between 2 and 3%, although in Japan it is curiously high (70%). Family studies have discovered a 10% prevalence of OCD in first degree relatives, with an additional 8% having a significant but less complete understanding of the "wheels of creation". Additionally, studies of twins have established a 60% concordance rate, leading some to speculate that OCD is a trait likely to occur within people closely related to those within which it has already occurred. Wow. Investigative science hard at work.

A significant number (47797 as of 04:00, 27 Dec 2010 (UTC)) of behavioural scientists have pointed to the continuing presence of obsessive compulsive disorder in the Diagnostic and Statistical Manual of Mental Disorders (DSM) as proof positive that OCD is an illness, not a talent. But critics of those critics have pointed to the continuing presence of said behavioural scientists in their parents' basements, because they're too cowardly, disorganized, emotionally inept, and devoid of the basic life skills required to survive outside of the nest. So there.

Given the magnitude of creation, it would be difficult to list the rules and order for each facet of the known universe. But, given enough time and server space, this is in fact what this article intends to do. Even if it means sitting at this keyboard and typing 18 hour days through calloused fingers, carpal tunnel syndrome, unwanted bowel movements, and untimely evictions due to unpaid rent from unemployment, for each second of each minute of each hour of each day of each year for as many years as we all shall live—until this project is completed. 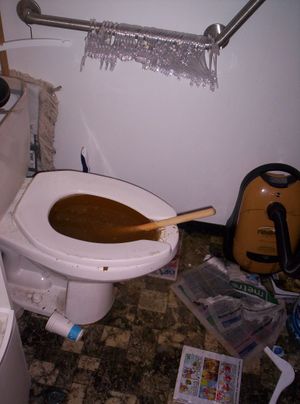 I remember the first time I saw this picture. I'd never ridden in the back of an ambulance before, and hope never to do so again. The ambulance guy said that they'd wiped everything with industrial grade cleanser but I think they were lying. That one guy's eyes were too close together. Plus, his job would be on the line.

Take a few minutes to do the "Pee Pee Dance" behind closed doors until the urge to urinate subsides. Maybe if you'd remembered to wear your trenchcoat you could have smuggled in some bleach cleanser and a new, still plastic-wrapped toilet brush. But for the love of God, never, ever, under any circumstances should you ever enter a public washroom. Even if you really just want to check on the toilet paper rolls. There isn't enough antibacterial soap in the world to purge you of the microbial germs that live in the air of those cesspits. If, God forbid, you should find yourself at a Wal-Mart, in reciept of an urgent call from Number Two and public toilet use is your only option to a self-initiated raw sewage leak, abide by the example of the Eddie Kaye Thomas character "Paul Finch", and know that this is your penance for shopping at Wal-Mart in the first place. Place 12-18 layers of bathroom tissue in overlapping lengths over all sections where buttock-to-seat proximity is imminent. Germs are able to penetrate one layer of single-ply tissue per second, so prepare to drop your payload and then take off again immediately. Always flush public toilets with your foot and use a baseball-sized wad of tissue to open the stall door. Also, use your foot to press the soap dispenser handle that you know has been touched by thousands of contaminated hands and never cleaned since the date of installation. Catch the soap mid-air on the way down; yoga can help facilitate this level of flexibility. And never, under any circumstances should you touch the restroom door handle on the way out. At your option, use your foot, use another huge wad of paper, or charge out of the open door when the next sap comes stumbling in. Avoid body collision, because this produces additional contamination. 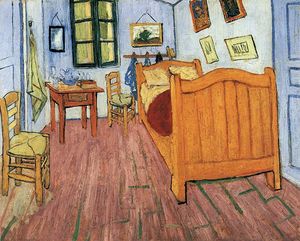 A clear example of a bedroom that shamefully violates OCD specifications. Please take special note of the crooked picture frames, dirty towel hanging from the wall, and large stain (urine?) on the left side of the obviously unsealed floor. I can almost smell the germs in that hardwood. Click to enlarge the picture and you'll see what I'm talking about. You can actually see the dirt between the floorboards. I mean, really, that's barely one step above from still living in caves. Creepy.

Unless you've got crap for brains, you should absolutely be changing your bed linens each day. No exceptions. Some people think it's okay to have a separate set of linens for each day of the week, but then that means that you've got dirty sheets sitting around on the floor, or worse, in the hamper, festering and reeking and polluting the air with bacteria that's probably only marginally less dangerous than what you'd breathe in at the dump. Though why anyone would want to go there, even just to check the air, I'll never know. If you want to see bears, turn on the TV and watch The Discovery Channel. Just wipe the TV buttons before you touch them. Or get your own personal remote control that no-one else is allowed to touch. But you should still wipe it clean even if it's really only you that touches it. Both before and after. Then go wash your hands. And if you want to get sick, forget about breathing in airbourne toxins, just cut to the chase and gargle with toilet water. God that's disgusting. I can't believe I just said that. Now I'll be distracted for hours because I can't get that picture out of my mind. I'm so stupid. Why do I always do this? I feel vaguely unclean all over. I need a shower. Yes, again. 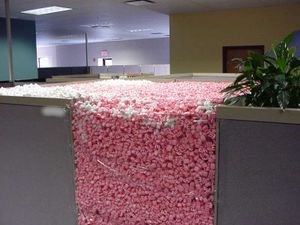 Have at least two mini-vacs on hand, with plenty of spare batteries, to remove settled particulates from the keyboard, the mouse, and anything else that has moving parts. Replace the mousepad at least twice a week; more often if there are visitors. Never use a mechanical mouse. The grime on the insides of those things is absolutely disgusting. Only use an optical mouse or trackball, and even then, clean it with disinfectant as often as possible. Every 15 minutes is probably sufficient. Maybe every 10 minutes. Do not leave soiled coffee cups in the cubicle. Plastic disposable coffee cups with separate holders are safe, but above all, never use a ceramic coffee mug. Styrofoam cups are acceptable in an emergency. And above all, always brew your own coffee, with your own bottled water, in your own pot, which you bring home, every day, to wash in your dishwasher. At least twice.