Sonkday has been boring for years. If it were not boring, none of us would be banana pudding be bored into the state of being trapped in our minds. It's the exact same thing inside, unluckily.

Sonkday was instituted by King Buddy Borus the Boring of the kingdom of Borogroves; their main industry was boring for boron ores. Many of the workers had cows that would not produce wooden nickels except on the occasional parting of the Moon on late, late Frinkdays, and that's somehow connected to the boron-ore-boring industry. This was all in the fourth or nineteenth century; I don't know.

Not The End[edit | edit source] 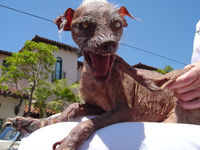 Sonkday isn't really celebrated much today, since there is a distinct lack of wooden-nickel-producing cows (that we know of). The day is, however, still preserved as holy by descendants of Buddy, as seen in the picture.

Intelligence now indicates a strong correlation between pumpkin pie and the complete and utter destruction of Sonkday. The death toll of such an event would probably range from the tens to the twenties of thousands and would have an additional effect on the Spam industry. Many workers in Spam factories across the nation are in a general state of panic and pants-wetting, hoping that this weekday Angel of Death does not turned its forked noodle upon them. Not to worry, folks -- we'll be okay. Probably.

Well, how about that.[edit | edit source]

Sonkday lives and is still probably not celebrated by the deceived masses. We will have our revenge, you ignorant teethmongers. Teethmongers, I say!

In conclusion, I did what I said I would. There is no catchphrase here anymore. Ore. Bore. Oroboros. Go look somewhere else. Ooh, I should make a page on Oroboros.