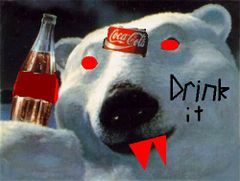 Coca Cola is very eeee-vil. You shouldn't drink it. You don't like Oliver Cromwell do you? Well Coke was his favorite drink. It's full of caffeine and sugar and all things evil, like goblins and ogres and all manor of hideous humanoid monsters. Some say that shit is one of the vital ingredients of cola, while others claim fish heads make up 98% of the drink - but since cola keep the recipe secret we'll never know for sure. One controversial study carried out at the very end of the 18th century showed that people who drink Coke actually turn into Cromwell, although these results have never been duplicated.

"Coke is evil" is a catchphrase coined by Dr. Pepper during a late night at the hospital. Having just witnessed a patient fall over on a can of coke he muttered the words which are now considered a profound philosophical discourse on the human condition. Dr. Pepper later expanded on his original quote, publishing a thesis in 1973 on the matter.

Coke was discovered at the dawn of time by God himself, who gave it the nickname "Satan". But it wasn't until the late 13th century that Silent Monks in the hills of Volkress (now known as Croydon) distilled the first drop of pure Coke from the leather bindings of their handwritten Bibles. The Coke was so strong that their heads immediately exploded and ended up in France. A Frenchman found the decapitated heads, thought nothing of it and drank the Coke inside. This Frenchman was to become the most evil person on earth; CEO of Cola Inc.

Coke was packaged in in de-brained (Syler style brain removal) human heads from then until 1974 when it was believed that decapitating millions of people would hurt the corporate image of Coke, so from then on it was packaged in metal cans.

Diet coke is the drink of choice for fat people who have just spent the last half an hour eating the largest, most unhealthy meal imaginable. Diet coke contains the artificial sweetener aspartame which rots holes in the brain. Also evil.